I have a piece of advice for the people running StAnza, a very simple piece of advice, and it is this: When you have given a poet twenty-five minutes to fill, make sure there is a pocket-watch duct-taped to the podium, so that he or she can gauge how much time is left of the session. What happened this afternoon with Hazel Frew is that having finished a run of poems, and got to minute twenty-five, she then picked up a book, looked across at the chap in charge, and asked “How long have I got?” He, being a polite chap and not wanting her to end her session abruptly, said “About another five minutes.” She ended up with a total of thirty-five minutes, having read us two dozen poems. Now, I have nothing against hearing twenty-four poems by Hazel Frew, because she is after all a good poet, but once again a ‘Border Crossings’ session was badly balanced when it didn’t need to be. 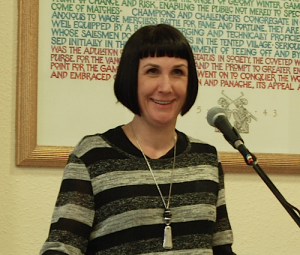 Hazel was brought up in Broughty Ferry but now lives in Glasgow. She expresses a preference for poetry that is ‘direct, but in an indirect way’. When her mother died of cancer, the shock was so great that it took a long time for her to get over writer’s block. It was only broken when the local authority in Glasgow decided to demolish a public garden and fell some trees that had been standing for well over a hundred years. She was then able to write about her mother’s illness, from diagnosis to death, and she presented us with fifteen poems about this. They were serious to the point of being sombre, and they were very, very emotional. Her part of the event was then lightened a little by readings from her book Seahorses, and from a couple of pamphlets, but as I said, it over-ran. 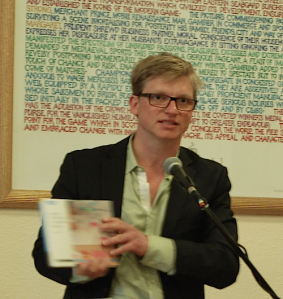 Martin Glaz Serup is from Denmark, and writes in both Danish and English – I instantly thought back to the previous day’s ‘Poetry Café’ in which Agnes Török, who is from the other side of the Øresund Bridge, had a few pointed remarks about bilingualism. He read to us in both languages, mainly, he said, so we would hear how they sounded in Danish. His poems were much longer than Hazel’s; with the Danish versions and extracts, he was only able to give us half-a-dozen. These were full of questions, rhetorical questions mostly, or so we were (possibly) led to believe – weren’t we? The first one included hand-gestures, in lieu of a PowerPoint presentation, to indicate each question mark or Yes/No option. Here’s a question:

Do you have to be happy in order to write a poem about happiness
or should you, precisely, not be happy
should you be made happy by reading it

Please note the complete lack of question marks! I like that. Martin’s poems travel from point A to point Z, not necessarily in alphabetical steps, but they get there. And don’t be surprised when a famous name or two are dropped.

Sorry I over ran in the reading, I had no idea I had done this – it was entirely unintended.