The Conference Room is not the most attractive venue at the Byre, being bare, airless, and humming, but it does have the advantage of technology. It is easy to set up a laptop there with a feed to a screen. If StAnza-goers had been observant, they would have noticed occasionally on the wall of the theatre Atrium, a series of projected phrases zooming in and out of prominence, and maybe wondered what they were. This session was designed to give an explanation, or at least go some way towards it.

Michiel Koelink is Dutch, and Jon Ståle Ritland is Norwegian, but writes poetry in English. They met at StAnza two years ago, had a meeting of minds, and decided to collaborate. The raw materials were Jon’s poetry, in particular works from his book Body Searches, and Michiel’s dexterity with computers. He gave us a quick display of how his software plays with Jon’s words, fixing each phrase to a dot, and the dots attached to each other by lines. There is a central point of ‘gravity’ on the screen to which everything is attracted, but working against that the dots push away from each other while the lines tend to pull back. No, I don’t understand why it doesn’t all end in equilibrium, but it doesn’t. It moves, and phrases emerge into the foreground in an apparently random fashion. The sequences generated do not seem to repeat themselves; Michiel explained it by the analogy of throwing a glass of wine into the sea, and then bringing the glass back twenty-four hours later – it is mathematically possible to scoop up something that is one hundred percent wine, but it is very, very unlikely.

Then Jon gave us a reading of some of his poems. Here the session came unstuck a little, because he has a very quiet delivery, so we struggled to hear well. Perhaps next time there should be a little light amplification provided – it only needed a touch. After that it was Michiel’s turn again to take us through some of the ideas he had been working on prior to their collaboration, which inspired and fed into it. 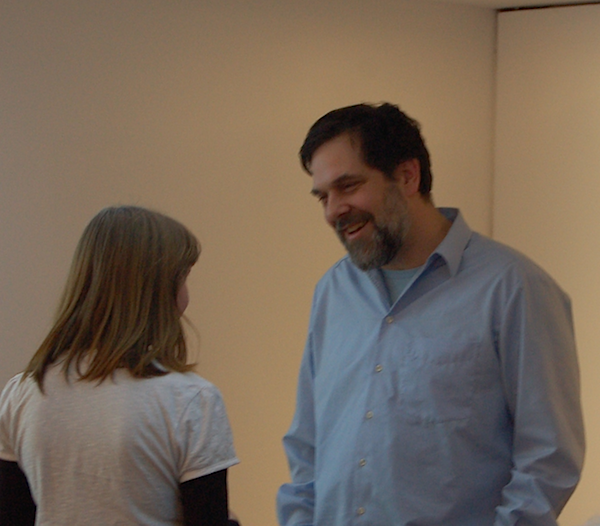 We had the opportunity to comment and ask questions, which was quite fruitful and prompted a handful of people to speak up. I commented that the effect reminded me of how a touch-screen tablet responds to swooshes and pinches of its operator’s fingers, and wouldn’t it be wonderful if that could be incorporated in the project. Michiel nodded and said that the idea had indeed occurred to them but it was way, way over their available budget.

I’m not going to award stars for this event, because it wasn’t that kind of event – but yes, I enjoyed it, and it sent me away musing on how conventionally we read poetry.