Spending a Saturday evening, cooped up in a library listening to poetry has never held much weight for this reviewer over the years, but Aye Write! Festival 2015 were unearthing the hottest property in spoken word this evening at the Mitchell Library in Glasgow in the form of George Mpanga aka George The Poet. The 24yr old Londoner has been making quite a stir over the last couple of years, featuring on BBC Radio 1, Sky Sports F1 Grand Prix in Monaco, and being shortlisted for the Critics’ Choice category at the 2015 Brit Awards. An ability to adapt rap into a strong, poetic form has enabled the young lyricist to carry his social and political messages farther than even he could ever have envisaged, and for the second time in the past couple of months, George was ready to win over Glasgow.

From among the hubbub of silver-haired scholars, studious apprentices, and salmon-shirted Aye Write staff directing festival things to their appropriate halls inside Glasgow’s stunning Michell Library, Jean Cameron welcomed George to the stage – headset attached, projector backdrop, comfortable seats for Q+A purposes, and lectern on stage awaiting like a business conference. Although sceptical at this formal layout, the evening settled quickly into the young bard’s calm and likeable approach, reeling off the thought process behind new book ‘Search Party’ (launched February 2015) with anecdotes before each poem.

It is the ability to slip comfortably between academic language and London slang which is George’s most established quality, spouting advice between each articulate, assertive line. It is only the occasional stutter and brief pauses to regroup his thoughts which allow the audience to blink free from being indoctrinated by the poet’s tirade concerning ‘the universality of humanity’. This is not to say that this is an unwanted brainwashing, however peculiar that may seem. It is a positive spiel concerning social groups and opportunities available within communities which the skilled lyricist is administering during “Believer”, rising out of the social groups in which we are all parcelled into. The attentive crowd do not applaud until our speaker chooses to say thank you, and it is perhaps a small intimation that the air feels too heavy and that the guest needs to feel that he has everyone on his side.

In “Scapegoat”, the insightful prognosis that a strong social group offers latitude from life’s difficult times is not a revealing proclamation, but it is the poet’s undertones to fight which veer his work from thoughtful oracle into motivational speaker. As he states himself, George loves a validated argument and his curiosity in problem-solving and seeking solutions within corporate circles occasionally jars between being on the cusp of enlightened, radical thought-processes and the enterprising mission statements one finds in the reception areas of big business. Indeed, tonight’s orator cleverly uses the incantation of human growth and technological advances to surprising effect in one poem:

“There are seven billion people in the world

and not one has the same fingerprint as you”.

If George was selling a product, then it would be self discovery and how to progress oneself. The lesson of learning from one’s failures is addressed in the questions and answer session after a half hour set, wherein his advice to younger poets is not to ever consider themselves ‘lesser’ at the beginning of their journey, but to embrace that transition of human experience. Using commentators and an assortment of heroes such as Muhammed Ali, Malcolm X, and Maya Angelou as an example of anyone who can articulate an ethos, George’s observation that one newspaper referring to him as a ‘rapper’ may border on racism is food for thought, and addresses exactly where ‘the poet’ moniker begins. The slow and deliberate responses, articulating his experiences, lends tonight’s performer as being both considerate and respectful, always seeking ways to add value to his words. 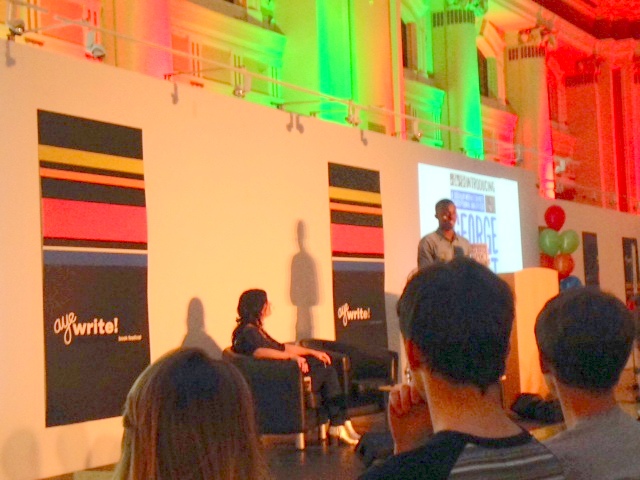 Satire frequently breathes inside of George’s messages, and from experiences ranging from reading in UK prisons to Buckingham Palace, a broad spectrum has now listened to his positive rhetoric and unabashed plugs for his new book – or ‘manifesto’, as he calls it. Tonight was a fascinating experience which left the crowd with a lot on their minds with the upcoming elections only weeks away. If the young poet’s proclamation that we are all in boxes used to manipulate political standing, it will be interesting to listen to what he has to say once the ballots have been crossed and the results are in. Don’t be surprised if, one day, you find yourself voting for George Mpanga’s Search Party.