From the start, there is something slightly olde-worlde about Duffy’s performance. For some reason, our first female poet laureate is heralded by a pipe-bearing, flute-twiddling Scottish musician named John Sampson. In fact, the first ten minutes of our precious hour with Duffy were spent watching Sampson cavort around the stage offering to show the audience his trumpet, fit two flutes in his mouth at the same time, and, well, at that point, I stopped listening.

I know Duffy was appointed by the Queen, and I can see how in some ways how this buffoonery may even be subversive. When Duffy stands and speaks, she is witty, sharp – mocks Sampson (“the queen gave him to me”). But I still felt offended somehow, as if Duffy had been subverted herself by the almost medieval elitism, and ridiculousness, of her position – which is actually still paid in sherry.

In fact, the scent of elitism is a little hard to escape in a marquee sponsored by an Investment Fund, at a book festival constructed around a monument to Prince Albert. But, well, everything is just so pretty. The Edinburgh International Book Festival is a little slice of Eden. Set around the balmy gardens of Charlotte Square, middle aged bohemians wander in and out of arbours, sipping on Syrah and munching on gluten-free brownies. From the posh porter-loos to the Ayrshire bacon artisan rolls, the forces-that-be have created a safe, welcoming, and sophisticated little bubble for poets, writers, and wannabes to bathe in the glory of the living canon. 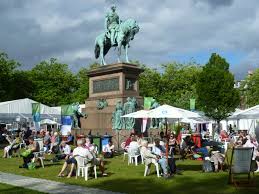 And bathe we did. Nestled in our very comfortable seats, amongst a very well-to-do scattering of tweed-clad toffs (with a good showing of young female students mixed in), the audience waited in the silence left by Sampson’s over-bearing trumpet for Duffy to rise, slowly, and take to the podium with one eyebrow lifted at the red-faced Sampson. Her jibes were as rehearsed as Sampson’s performance, but (of course) she is hilarious, and in less than a minute she dissolved the audience into fits of laughter, and moved swiftly forward to tell us about her interest in metamorphosis. (Phew).

From there the show is well put together, and insightful. Duffy tells us she likes to celebrate, re-tell, and subvert the characters from classic fairytales and myth. Ovid is a great influence, she says. Her first reading, “Mrs Midas” is a poem set in the modern day, told from the perspective of King Midas’ wife. She follows this with Mrs Tiresius, and Mrs Faust.

Mrs Midas is delectable. Read aloud in Duffy’s guttural voice (her throat really stretches out her vowels, her jaws hold tight to her consonants), the sounds reverberate as vividly as the images unfold. Duffy flits from the everyday, the comic – and slightly absurd – to the heady, “He tried to light a cigarette; I gazed, entranced/ as the blue flame played on its luteous stem.” With its didactic quality, and simple conceit, it is no surprise this poem is a GCSE favourite. The next two readings, Mrs Tiresius and Mrs Faust, were not quite as titillating, their forms are very different, Mrs Faust in particular did not work well aloud. And I couldn’t help but feel that the criticisms of affluence and masculinity operating in these texts were severely undercut by the sound of home-county gents cackling around me.

After another interlude, Duffy read from Rapture, her celebrated collection of love poems. These works, dense, and compact with their ricocheting rhymes, are terrific, especially read aloud. Her performance would have put many a spoken word artist to shame. Duffy went on to discuss the notorious (and short-sighted) removal of one of her texts from the GCSE curriculum (it was accused, wrongly, of supporting knife crime). Her response is an acerbic piece titled “Mrs Schofield’s GCSE” – listing the more violent parts of Shakespeare. Duffy wrought out every inch of irony with her performance, voice dripping with biting scorn, sending the audience into stitches with her withering looks.

And at last, “Water” – a deafening whisper of grief. Duffy said nothing before or after. As she read, many around me were crying. The poem, written four years after the death of her mother, is astounding, and restrained. The entire room was left astonished. I found it hard to open up myself again to the rest of the show.

This is what Duffy does best – she sweeps the reader away in language paced at the tempo of normal speech, then twists her images, her conceits into bulbs of strange and beautiful poignancy. It was a privilege to hear her read something so profound – her poetry at its best is so overpowering, so vivid, and yet the language is so plain, so distilled. After we recovered from Water, Duffy performed a piece from “The Bees,” and another poem about her mother titled “Premonitions”, which traces time back from the moment of death. As Duffy read, John Sampson accompanied her, and I couldn’t help but wish I could have heard the poem read alone.

I’ve heard from a few different sources that the most vivid memories of a holiday are not the ones spent climbing mountains, or surfing waves, or wandering through medieval cathedrals – they’re actually the hours you spend waiting at security, squishing onto the plane, and putting up with a crying baby for four hours. The same comparison could be made to Duffy’s show. It has been 24 hours, and I still can’t get Sampson’s double-time rendition of Mozart’s fifth symphony out of my head. And I still can’t help but wonder who on earth decided to pair Britain’s most subversive poet laureate to date with a court-jester. Or for that matter, why poets believe they ought to make their audience laugh. Duffy is where she is, because she gives adults, and children, the tools to feel things – to grieve, and to love, and to rage. Teachers across the country use her poems to teach young adults how to critique the world around them. As with the rest of Duffy’s opus, the best parts of her show were those when she did not try to entertain for entertainments sake, and simply opened herself up, read things fashioned from solitude, things written to people long gone.

The moment I will (try to) remember is the time when Water washed over me, when I heard others cry, a woman nearby gasp. When I was filled with grief, and my breath caught in my throat at the cruelty of death, the way it doesn’t stop stabbing you in the heart, suddenly, right out of the blue.  This is what makes Duffy worth hearing. Not the trumpets, not the clever references to Faust, not even the biting and brilliant digs at the institutions who have muted her. No, the thing that should niggle at your brain, get your arse into a seat, nick the tenner from your wallet, is the promise of that moment of immense profundity. A lament erupting from the poet’s lips. There are plenty of moments in life to make us laugh, plenty to makes us feel content, but how often do we sit with a poet in a room and remember that those private and terrible flashes of sorrow, or anger, or discontent, are universal? How often are we treated to an audience with an artist who is more skilled with language than most of the world, who can speak in ways no one else would imagine, fashion a poem fit for a queen?

(And someone do me a favour, yeah? Ask the Dame how come she managed to get away without writing a poem for the royal baby, but agreed to a f*cking jester?)

One thought on “Edinburgh Book Festival: A Reading by Carol Ann Duffy”

Gluten-free brownies? Damn – I missed those!