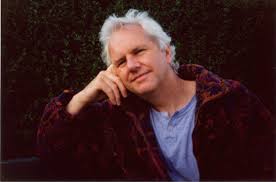 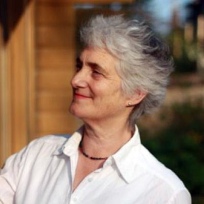 Let’s start at the end: during the Q & A session an audience member asked the poets: “What are your thoughts on the tension between performance poetry and poetry on paper?” Both poets concurred that their poetry is rooted in a Scottish oral tradition and that to read poetry aloud was a natural and vital part of their art and conversation with the Scottish public. There was no need to go into “Bardic Overdrive”, as Ron Butlin described it but that public readings and sharing poetry in this way was as the theme of the reading—Seeing Scotland in Verse–suggests essential to the life of verse in Scotland. Indeed in my view this question had already been eloquently answered in what had gone before as both poets read a selection of their poems beautifully and the sound, cadence, politics and humour of their readings certainly captivated me—a newcomer to their poetry. An interesting aside on the point was the lectern on the stage—disavowed by Ron Butlin who chose to address the audience directly without the intervention of the symbol—a small matter perhaps and one that made little difference to the quality of the reading but one that was related to the question and one that was to introduce us to political themes in both the poets’ work.

The Scottish referendum was unsurprisingly considered by both poets to be a catalytic event for Scotland and Scottish poetry—Valerie admitting that while living in America she followed the debate constantly on the new technologies and had to fly back to experience the moment . Ron Butlin reading from The Magicians of Scotland gave us The loch Ness Monster’s Post-referendum Curse a wonderful, absurdist and humorous take on the event that also developed another interesting thematic element of the poetry—the conflation of Scotland’s past, present and future. Nessie is “hauled” from the depths of his “dark-fathomed kingdom” for a photo-op and asked to supply a profile on Linkedin: “and they wanted me to tweet?” Nessie asks. Valerie Gillies’ politics is one that is less direct but meditates on Scottish history, identity and the environment– reading from The Cream of the Well in To Edinburgh we consider Scotland’s Roman past:

in eden Edinburgh, centred on the rock,

our city with your seven hills and heavens.

Both poets previously being Edinburgh Makars and this poem written during her tenure, Valerie confided—with a smile– that Edinburgh council considered the name-change “Edenburgh”. The political aspects of Ron Butlin’s work is further broadened with poetry responding to contemporary national and global events—events with particular resonance for Scotland. A poem that was very well received by the audience was Tony Blair’s Butterfly Effect read by Mr Butlin who introduced the poem by discussing the inspiration behind its composition: on pondering the Melville Monument in St Andrew’s square he felt there was an uncanny resemblance to Tony Blair (Edinburgh being the city of his birth) in the sculptured eagle glaring down from the plinth:

Time enough for down-soft feathers to have stiffened

Time enough to curve himself a profile

Of absolute conviction, take on

A gaze of stone-hard sincerity.

Of course there was much more to the poets’ work than overt political themes; however, the proximity of the referendum and current political developments predominated and justly so. Let’s return to the end: another audience member in the Q& A session asked the poets’ views on the politics of austerity and its effects on Scotland cultural life—in particular with a direct reference to library closures in Fife—for both poets libraries (physical not virtual) were vital for Scotland’s cultural and educational life and that austerity was a “con”—it’s clear the Scottish public agree. A beautiful hour aesthetically and intellectually; the only criticism is that it was too short.