Kate Tempest is no prophet, no shaman, she tell us. But she believes that the world we live in is deeply troubled, that there is something stopping us from accessing ourselves. It is vital, she believes, for people to gather in a room and hear someone give voice to their fears, their questions, the discontent that accosts them. It is important for someone to say aloud and with conviction, “I have felt this too.” Relief, is one of the things Tempest offers her audience (if not anger in equal measures).

So gather we did at the Edinburgh Book Fest – a scattering of young(ish) poets and writers, a handful of incendiary journos (Not Guilty), and a sea of hoary old Book Fest Veterans. As I took my seat in the Baillie Gifford theatre, a charming old couple with plummy home county drawls sat down next to me: “Could you tell us,” they asked, “who Kate Tempest is? We thought this was something to do with Shakespeare!” 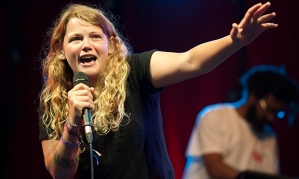 I will not draw lofty parallels between the two (although I do believe Tempest has the talent to leave as lasting a legacy). Tempest is a unique and blistering force on the music scene (nominated for the Mercury Prize in 2014), the spoken word circuit (is there anyone more successful?), and the poetry world (published by Picador, edited by Don Paterson). As talented a performer as she is, Tempest admits right from the start that she feels more than a little awkward,  perched on a stage in front of hundreds of people, listening to her Picador Editor Don Paterson ask vague questions about her ethos and her “stagecraft”, overusing phrases like “the page” and “the stage”, and at one point asking, haltingly, if there is a “shamanistic, priestly element” to her work, citing “cadences of performance prevalent in early black performance”.

Luckily, Tempest is down-to-earth, honest, hasn’t got a scrap of makeup on, isn’t trying to make people laugh, or even convince them to buy her album, or leave any kind of impression (she’s “not trying to sell perfume”). She is there to talk about her work, about her life. It is important to her not to become a product of the music industry, or some snobby commodity hell bent on distinguishing herself from the masses. The intention shows. Her answers are thoughtful, genuine. Funny. When Paterson asks her about these so called “shamanistic elements” in her work, Tempest responds by citing her conviction, and her roots. Rap has taught her to speak with conviction, and that’s what lies at the core of what she does. She just really f*cking believes in what she is saying, and the way she says it.

Brought up in South London (before the hipsters moved in) in a scene where rap was a fundamental element of culture, communication, and assertion, hip hop was just something she was desperate to be a part of. “I wanted to be a rapper, I lived and breathed hip hop,” she tells us. “It was a vibrant culture I felt close to, I worked in a record store writing rap secretly… and I was crap. You’ve got this big circle of locals and I was white, a girl, podgy, gay… and I wanted to rap about conspiracy theories. But if you haven’t got anything worth saying you’ll be laughed at … and that happened for years.”

The commitment shows. Tempest’s work is fired with social observation, fears about the direction society is headed, anecdotes from her time lived in that crush of anonymity, London. A city bursting at the seams with hypocrites and hypochondriacs, builders and bankers side by side on the tube, protestors and police fighting each other, while kids every colour, every accent, every name under the sun are growing up – and looking around, and seeing the strangeness of it all, but there’s just the same old headlines and the same old politicians, and the same old problems. That’s where Tempest comes in.  Her lyrics speak to this strange dichotomy of suffering and nonchalance rampant within the city, and the political state of the nation:

See the man with the blood on his hands/ See the girl with her hands on her hips/ Everybody say nothing. Stay bland/ If you don’t show it then it don’t exist/ Right?

It’s obvious that for Tempest, rap and poetry is a compulsion. Her work is intended to generate change, widen people’s eyes, say something that needs to be heard. In a recent article also reviewing the night, a misguided journalist claimed that Tempest had some kind of issue with so-called “conventional poetry”, which is ironic given she herself is working on a poetry collection with Don Paterson, for Picador – names which are almost synonymous with convention. Tempest is clear about there being a division between performing poetry and poetry for the page, but believes “there is no set of values that makes one more important than the other…a poem on the page isn’t finished until its read, it is a map towards the experience or emotion a poet had; performance happens in the moment it’s received. The person who hears the poem is most important.”

This is Tempest’s focus – not weighing art forms or celebrating herself, but getting her message across. Indeed, while most of the interview with Don Paterson is taken up by these kinds of debates over the “page” and “stage”, discussions regarding the nature of performance, and Tempest’s flourishing career, Tempest keeps coming back to the point to of it all, why she does what she does. Tempest is very clear about the amount of work (and failure) it has taken to get to where she is now. She is not an “overnight sensation,” as so many have described her. She’s been working on her craft for fifteen years, going to gigs in “dodgy pubs” to perform to men who “just wanted to watch the football,” competing in rap battles on boat parties. Touring, writing, honing her craft. When you spend that long working on your craft, you have to wonder (often) why the hell you keep doing it, what on earth the point is. Tempest admits that at times she is riddled with insecurity – “that thing that tells you your work is going to prove to the world how shit you are”. The thing that Tempest wants most – she says is not to make audiences laugh (“if a room is full of laughter, it doesn’t mean they’re listening”), but to get her message across. “There’s no point preaching to the converted,” she says.

Perhaps Edinburgh Book Fest, then, was the perfect place for her to visit. See, Tempest wants to get her voice out there – and whilst her rigorous festival circuit is probably amassing a cult following amongst the young and drug-addled eighteen to twenty-somethings, there is a whole other audience interested in learning more about this young supernova, people who don’t really know where to start. I expect a Picador/Paterson stamped collection, and a slot at the Edinburgh International Book Festival will certainly do the trick. The night was hilarious, intriguing, and fresh. I’m actually glad Paterson hadn’t prepared much for the night, as it gave the conversation plenty of room to dip and weave into areas I doubt Tempest would have covered without the pressure to say something of interest, with little guidance for her editor (the bane of many a writer’s existence…)

Tempest may not be a prophet, she may not be a shaman (and dear readers, she has nothing to do with Shakespeare). But she certainly has the integrity, and the devotion to make a lasting (and much-needed) mark on contemporary poetry, introducing the art of spoken word to audiences unaccustomed to the power of physical performance. She certainly seems to be converting the masses. After the night was over, I spied my plummy voiced neighbours wafting over to the wine tent with a fresh copy of Tempest’s collection tucked into the pocket of their tweed jackets. A few minutes later, two younger girls walked past holding Tempest’s poetry collection.

“Thing is,” one of the girls said, “I have no bloody idea who Tiresius is.”

The other girl shrugged.

“I think it’s got something to do with Shakespeare.”