“It was only after I’d written this [story] that I realized it was a metaphor for the American occupation of Iraq.”

Do you fantasize about turning the tables on David Cameron, and fucking his skull with a pig’s dick?

Are there times in your day to day existence when you feel as though someone has swapped this life of ours with a nightmarish scene from a horror film?

If so, then you’re probably a functioning human being with eyeballs, a functioning sense of empathy, and shock at the state of our world.

Life, as ever, is a deluge of horror and beauty.

On one page of a newspaper, we are shocked by images of dead children washing up on beaches. On the opposite page we are offered “Childfree Holidays” on the sun-kissed sands of Tunisia.

None of it makes sense. Perhaps, like me, you find yourself swinging between outrage at the injustice of this world, and the strange ways we must keep on living, normally – trundling through the everyday. Even if somewhere over the rainbow a child has no access to water, you’ve still got to feed yourself. And no matter how much you donate or pledge to charities and relief funds and geniunely unfortunate humans begging for change, there will still be one more person asking for your cash.

What do you do if you cannot board a bus to Greece to support refugees? If you are too busy supporting your own family to spare time or money for another? If you are studying, working, perhaps struggling to exist yourself? Is it wrong to keep a bit of dough aside for your self? To turn off Panorama and fast forward through the fifth dog rescue ad you’ve seen today?

Is it not your right to escape?

(Now, I’m not talking about a full-blown rave, strippers on a canal boat, or an application to this bullshit Martian population gimmick).

I’m talking about those moments on the bus, the hour you have to yourself on a Tuesday night, the Sunday afternoon veg-athon when you just want to sit on your arse, eat cheese puffs, and watch a film.

Because that’s when we turn to the things that help us deal with all the bullshit. Pass the time. Feel like life isn’t just a series of disappointments and deaths.

When we actually have a choice of how we spend our time, it’s books, films, music we want. These are some of the ways we make sense of the world.

And surely we are justified by a need to distract ourselves from our own lives, distance ourselves from the news, take on someone else’s reality for a short while? In many instances, these forms of entertainment actually help us to mediate trauma, fear, or loss. A few hours spent grossing ourselves out over zombie films, pissing our pants at bridesmaid comedies, or fantasizing over fluffy haired fops in period dramas with wanky classical music on repeat genuinely offer not just a form of escape, but the space and time and subject matter to help us deal with these fears: of world war and death, the passing of time, social inequality, an unquenchable desire for love or success or power.

And Now a Case for the Written Word:

Books in particular have created a space for speculation. They are places in which we undertake great leaps of imagination which enable us to leave this time, this planet, this universe altogether, and wonder at the sheer ambition and power of man. H.G. Wells, Aldous Huxley, Jonathan Swift … these are men who saw the good and the bad in our world and reshaped their vision into something everlasting. I’d even make a case for shit like 50 Shades of Grey and Hunger Games – as pieces of writing which have unlocked feelings of deep sexuality and repression amongst women, or fear at the mechanics of capitalism, and started conversations amongst the younger masses.

There are small and brilliant voices sparking debate in Glasgow. Writers exist in this great city, who have seen the trauma of our time and given voice to it in refreshing and inspiring ways. Leading their charge is The Speculative Bookshop – one of the best platforms for new writing in Scotland.

Formed two years ago as a secondhand book stall, these guys have swiftly grown into one of Glasgow’s most interesting literary collectives – hosting events and speakers which constantly bring the creative mavericks of Glasgow into focus. Comic book illustrators, novelists, spoken word poets, and cabaret comics are amongst the many voices featured at the Speculate Bookshop events,

In a world so dominated by the giants of capitalism – by the self-aggrandizing mechanics of amazon, google, national cinema chains, and mass publishers, it is easy for voices to be lost. Often a film or book is created solely for profit, and pushed into a mold which the Forces that Be believe will fit to the average audience – a non-existent everyman with nothing in common with the true individual. 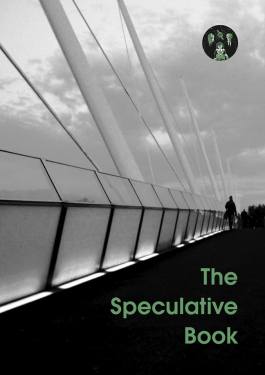 It is a good thing that we are all learning to think for ourselves – to find podcasts, and independent films, to visit the shop around our corner rather than the superstore around the street. With the rise of the internet, self-publishing, and fan fiction, people continue to write. Choices abound, and little breweries, bookshops, and restaurants fuck The Man, the mega-sized Conglomerates who evade taxes and fuck off to Tahiti and make jobs harder to get, and only sell cheap, poor quality shite and suck off the MPs making it easier for them to profit, and harder for us to live.

Long live the tiny independent bookshop! That’s where all the best writers came from anyway. And nowadays (Hipsters take note!) Glasgow’s Speculative Bookshop has done a brilliant job of collating some diverse writers into their first anthology. Quick, get a copy while its still uber hip and relatively unknown!

Speaking of Hipsters, on Friday 9th January, a few hundred of us assembled in the attic of Glasgow’s hidden gem, The Old Hairdresser’s for a night of poetry, fiction, and comedy.

The first reader, Ian Skewis, read a short and slightly surreal piece focused on the afterlife. His Martian vistas, simple dialogues, and dream-like imagery resonated with the same metaphysical surreality as Samuel Beckett.

Next up was ex-nuclear admin officer and Green party activist, Elaine Gallagher. A spectacular poet, and sensitive reader, Elaine Gallagher is a brilliant force on the Glasgow literature scene. Her reading was one of the highlights of the night – thoughtful, beautifully delivered, and best of all – simple. The final sentence of her piece was met with delighted laughter from the crowd. Her poem “Yesterday’s Tomorrow” is a terrific spoken piece, which meditates on ways in which the millennium has not lived up to the expectations (or predications) of the baby boomers.

Douglas Thomson’s piece, an excerpt from one of his newest novels, was impressive, and is even more so on the page. Thomson is a strong storyteller, with a firm grip on characterization, plot, and poetic imagery. I would highly recommend looking further at his opus. Dedicated fans can also catch him performing at a number of Glasgwegian poetry nights.

Offering a welcome respite from the heavier prose readings was Sam Small, one of Glasgow’s most prolific spoken word poets, and one of the biggest pioneers of performance poetry in the city, gave a number of terrific performances. His work ranges from comic and frenzied pieces focusing on love, sex, and the numbing forces of capitalism, to truly poetic and gut-wrenching poems centering on gender and suicide. He is a force to behold.

It is on the margins of society where the most unique voices can be heard. How fortunate that we possess the ability to publish such great writers, and discover them in Glasgow. There are a myriad of ways to make sense of this world. Sometimes we rage against the evil of the past, the folly of our own ancestors, the senseless mechanisms of government, and war. At best, we can protest, fund-raise, pray, and educate; failing that, we write.

There is something curious, something extraordinary afoot in the literary scene of Glasgow.

Get yourself over there, see for yourself.