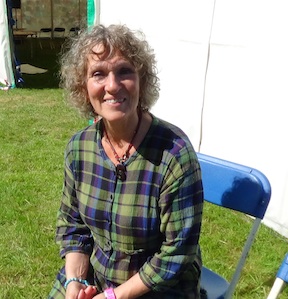 –
Jess Smith truly is a born storyteller, just like her ancestors. Lively and engaging for the entire hour, she kept her audience rapt with her stories of growing up in a traveler community and the wider, shameful and largely hidden history of Gypsy life in Scotland. Thrilled and still in slight disbelief that the winding journey of her 68 years had brought her to this point; from a fractured education on the margins of society to a popular and well regarded writer at the Edinburgh Book Festival, she used the hour to maximum dramatic effect. Using both humour and pathos for sure, while telling her personal story; a story woven into the fabric of the greater tale of discrimination against gypsy communities in Scotland that goes on to this day. There were murmurs and stunned silence as she tossed out alarming facts of oppression, experimentation and manipulation of the highest order to those deemed as ‘outcast’ in our own country. Her new book, the Way of the Wanderers, exposes the same methods used to colonise subject peoples all over the world, but right on our doorstep. A shocking expose of the fate of the ‘White Nigger’ in Scotland, to use the name of her father’s lost manuscript for which she spent years searching after she made a solemn promise to him on his deathbed.
—

Her soft voice drew you in to ‘relax and listen around the fire’, just as she grew up listening to stories. She began with her own funny childhood memories of her father bringing home a 1948 Bedford bus for her mother to live in, continuing to quell her mother’s protestations, “you can make it like Balmoral I’m not biding in that!”, with more and more luxury customisations. Eventually she gave in, and continued the travelling tradition with the ‘mansion’ her husband had brought her. These memories are obviously well known to her avid fans in the audience in the form of her first autobiographical book, Jessie’s Journey. Even though the success of that first book shocked her by running at no.1 in Scotland, ‘above Lauren Bacall’, she felt compelled to tell the world the relatively unknown history of discrimination by non-gypsies and revelled in telling us the fascinating coincidences that led her to tell the story. Fate firmly tapping on her shoulder until it was done.
—
She highlighted the injustice of gypsy children being turned away form the local school but their fathers and they in turn being sent off to war. Her own grandmother kicking up a fuss trying to register her grandchildren at the regular local school and being turned away. She highlights an 1895 report that she stumbled upon in the National Library which recommended the eradication of Gypsy culture, starting with the children. It outlines the children being sent to Australia and Canada, and the deliberate strategy to assimilate Aboriginal people by using Gypsy people to ‘whiten the race’ and eradicate unwanted cultural traditions simultaneously. It’s the other unknown piece of the jigsaw of colonisation; apartheid right on our doorstep. She touched on the role of religion in stigmatising gypsies and hinted that the popular image of a witch came from travelling folk who made brooms. She delved back into older historical time periods, to Robert the Bruce, Mary Queen of Scots, The Stuarts and hinted at a link with Roslyn chapel. Wafting wisps of unsolved mysteries towards us; ghosts of the past peeking through the pages of the history books.
—
It was wonderful to share her twisting journey; full of synchronicities; a chance meeting, a helping hand, a word of encouragement; all of which have nudged her inexorably along her path and allowed her to get this far. The compulsion to tell the full story won’t be quenched while she’s still alive. She made it clear that it has been an offence just to be a person of Gypsy heritage, quoting Henry VIII’s call to go ‘kill Pharoah’s children’. She longs for the travelling community itself to know the wider, painful truth that also highlights their own strength in surviving as a community. Smith has great hope now for the new generation of Gypsy teenagers who are not only fully literate, but going to university. They will start to ask the hard questions about their own tough history. She also suggested that sometimes you have to leave behind prescriptive academia and look at history with an open mind in order to find the truth of the matter. Due to her efforts, much of this newly found history will now be taught in schools. She reached out to the audience for empathy, as ‘All of us in Scotland have suffered’. Time for a change, as she entreats us to reach out to each other with open arms.
—
Reviewer : Lisa Williams