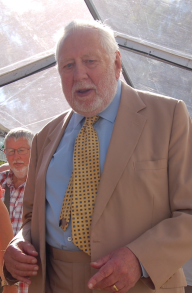 Throughout Roy Hattersley’s talk I was tweeting. Now, this isn’t something I would normally do during an event, but he was so quotable that I couldn’t resist. What this involved, however, was taking some flak on Twitter for the views expressed, as what I was saying started to get around to politically-active tweeters. The name ‘Jeremy Corbyn’ was mentioned once or twice, for example, and that drew fire. I had to point out that I was quoting verbatim from a live talk by Lord Hattersley at the Edinburgh Book Festival, and that just as in any talk, what was being quoted was the opinion of the speaker, not the reporter. If this illustrates anything, apart from the fact that passions are currently high in the Labour camp, it is that Roy Hattersley’s talk ran off-topic by about half-way through. It was supposed to be a reappraisal of Harold Wilson, whose centenary is this year. With a full auditorium of people themselves engaged with the politics of the day, it did not take long for that reappraisal to lose momentum and to veer off course.

For the first few minutes of the talk, I wondered whether I should treat it as a comedy routine, giving it stars for material, delivery, and laughs, because funny anecdotes came thick and fast. This was only the case, however, during Roy’s accounts of early meetings with Harold Wilson. Towards the end things became a little more sour. I should point out that Roy Hattersley is now markedly elderly. This isn’t a fault, it’s an inevitability, but it does mean that his voice began to fade long before his hour was up, and even with amplification he became difficult to hear at the back of the theatre. This didn’t help matters.

He described Harold Wilson as “clever, industrious, and quirky”. What instantly sprang to my mind was a quote attributed to Nichloas Kaldor, who was an advisor to the Wilson government of 1964: “People think Harold is extremely nasty but extremely clever. In fact he is extremely nice but extremely stupid.” Now, I’ll add the caveat here that I only have my own recollection of that quote to go on, so I can’t support it with a reference; even the mighty internet can’t back me up, so please just take it for what it’s worth – a possible difference in opinion between two men who knew Harold Wilson fairly well.

Roy recalled an early experience of speaking before an assembly of the Labour Party. He couldn’t understand why he was attracting laughter, until he found out that people thought he was doing an impression of Harold Wilson. Indeed, Wilson was a gift to impressionists! Roy described the 1964-1970 Labour government as ‘the most socially-progressive government of the twentieth century’, with measures such as the abolition of the death penalty and the legalisation of male, adult homosexuality. To him it was less socialist in ideology than the Atlee government, but infinitely more socialist than the Blair government; Tony Blair was, or is, a kind of socially-progressive Conservative, apparently. On two matters directly to do with Harold Wilson he was adamant. Firstly that there had been no affair between Wilson and Marcia Williams. Secondly that the reason Harold Wilson resigned in 1976 was that he was seriously ill, and was suffering from memory problems associated with the onset of Alzheimer’s disease.

The moment that the talk began to turn sour was when a questioner drew Roy back to his mentioning the strength of the Wilson cabinet, when it had people like Barbara Castle, Roy Jenkins, Anthony Crossland, and Denis Healey in it. Where, the questioner wanted to know, were the people of this calibre in the current Labour party? What this drew from Roy was words to this effect – that back benchers are better and more committed than they were in his day, and that he could name half-a-dozen or more Labour back benchers that would make a good Prime Minister. Fair enough. When asked who he thought should be the next leader of the Labour Party, he named Owen Smith without hesitation…

Here I am going to insert a declaration of total disinterest. I am not a member of the Labour Party, nor of any other party, and I do not have a say in whom they will choose to lead them. Out of Smith and Corbyn I know whom I like better as a person, but that is in itself of little relevance.

… anyhow, to continue. “People queuing at food banks need a Labour government,” Roy declared, “Jeremy Corbyn is unelectable.” Now, this is a mantra I’m sure we have all heard repeated and repeated, and about which we all have our own opinion. However, what is ironic is that Roy Hattersley repeated it on a day on which, in a BBC debate between Smith and Corbyn, the latter ‘won with the undecideds’ in the audience (according to Ayesha Hazarika). Winning with undecided is what being electable is all about, or am I missing something? “People who support Corbyn have never even seen a food bank,” Roy went on. Now that was the nadir of his presentation, it was a gratuitously offensive and appallingly condescending remark. How does he know with that precision what the demographic of Jeremy Corbyn’s support is? I would bet that many of them have indeed seen a food bank, and if they are not necessarily amongst those who draw upon it they will include people whose social conscience causes them to deposit in it! As do a lot of very ordinary people, Roy – people like me!

Okay, it is time to give him due credit. He might not have endeared himself to me by the end of his talk, but it was a full and informative one. He had drawn a full crowd and received warm applause. Would I go to see him again if he was to appear here at the Book Festival? No. As simple as that. No.