An Interview With Eleanor Livingstone 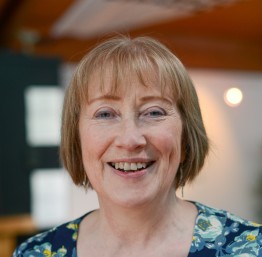 THE MUMBLE :  Hi Eleanor, just under a month to go til this year’s StAnza – are you excited

ELEANOR : I often say that planning a festival is a bit like being a film scriptwriter and the festival is the film premiere. You sit for months at the laptop writing down ideas, bouncing back and forward emails, drafting schedules and rotas: everything is a draft, something sketched out, then on the opening day, poets walk into the Byre Theatre for the launch and for five days they keep on coming from around the world as well as from across the UK, and the audiences as well, and it’s like our film script has been transformed into 3D glorious technicolour – except even better because it’s real and walking amongst us, talking to us, performing for us, so it’s as if they step off the screen and into our festival venues. It is the most magical experience and gives me a tremendous buzz each year. As far as the StAnza team are concerned, I think of that film, Field of Dreams. Our team plan the festival but we rely on around 100 volunteers to help us deliver it. So, each year it’s kind of an act of faith, trusting that if we build it, they will come, and they do! We get volunteers returning each year from all over the UK, as well as new ones joining for the first time, and most of our core local team are volunteers too. StAnza’s success is a tribute to them all.

THE MUMBLE : What special moments are we to look forward to this year, the 20th anniversary

ELEANOR : It’s a bit like Christmas morning, and it’s hard to know which parcel to open first because there are so many and they all look so exciting. However, some events stick out because of how they come about. There are some poets we have been trying to get for years, so when it finally works out, then that’s something special, so this year that would include John Agard and Alice Oswald (on the Wednesday and Thursday evenings respectively), and Sibusiso Conelius Simelane from South Africa. At the same time, it’s great to be welcoming back poets who have been great friends to StAnza, like Patience Agbabi. The Poetry Café spoken word events, at 1pm fromThursday to Sunday, are always popular, and I’m really excited about our French-language focus this year, after the success of the German-language focus last year. Plus we have recently unveiled our 20th Anniversary project, Mapping the World in Poetry which when completed will, we hope, feature an audio recording by a poet from each of the more than 50 countries from which poets have appeared at StAnza over the past two decades. And our Collective Reading last year, focused on poems for refugees, was a wonderful event and this year’s Collective Reading will celebrate the porous borders between languages and people, and should be very special. Anyone can come and join in.

THE MUMBLE : You were born in Bathgate, but have settled in Fife – what is about the Kingdom that you love so much?

ELEANOR : Fife may have saved my life, so that gives it some claim on me. As a child, I was extremely asthmatic. I spent a lot of time in hospital and on occasion my parents were told I wasn’t going to make it. They were advised to move to the Fife coast to see if the sea air would help, and we did and it did. I love the sea and all Fife’s coastline –the Scottish king James VI called Fife “a beggar’s mantle fringed with gold” – but also the variety of landscape and urban-scape in Fife, from the beaches and rocks along the south coast, sandy reed beds to the north, hills, fields, the arable Howe of Fife, to historic towns like St Andrews and Dunfermline, and old villages like Pittenweem and Falkland. And the perspectives. From so many points along the south coast you can look down on an amazing view across the Forth, but there are some stunning viewpoints further inland as well. Whichever way I drive from my home in Leven to St Andrews has glorious views, I say it has to be the best commute. One of the things we’ll focus on at StAnza this year is how the old Fife trading routes from the 1600s now lead to cities which have their own international poetry festivals, Bremen, Rotterdam, Bergen, Stockholm and Göteborg. 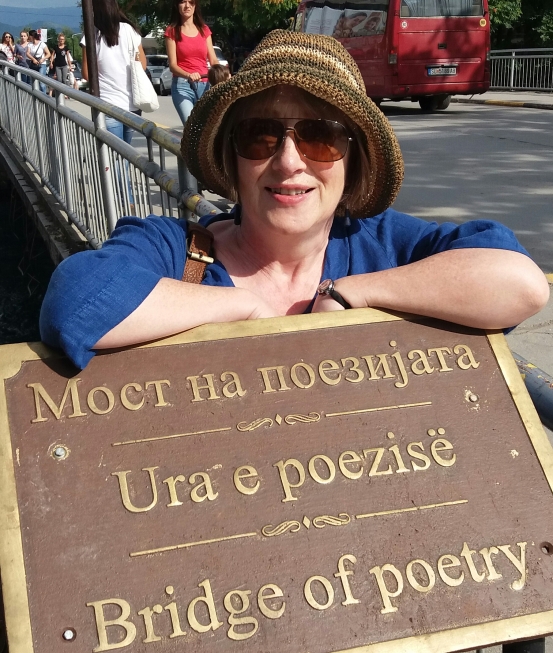 THE MUMBLE : What first got you into poetry, & who were your earliepast influences?

ELEANOR : When I was a child, and everyone had to be able to perform a party-piece, my parents discovered quickly that I couldn’t sing. In a musical family, that was a challenge but they sent me from age four or thereabouts for elocution lessons. There was quite a famous elocution teacher in Bathgate then. As part of these lessons, I had to learn poems. I can still do I don’t like porridge skinny and brown / waiting for breakfast when I come down. / Whatever happens, however late, / porridge is always sure to wait.  And The Sair Finger: You’ve hurt your finger, pair wee man, your pinkie, dearie me ….  And I think that got me started on loving words, texts, the sounds of them, how you could roll them in your mouth. I memorised part of Tam o’ Shanter at Primary School, trying and failing to win a prize for doing so, but I can still do the opening. Then in first year at High School, thank you Miss McRuvie, we studied the Border Ballads. The first poem I wrote aged 12 was a very bad pastiche of Helen of Kirkconnel – Curs’d the heart that thought the thought / And curs’d the hand that fired the shot. How could you not be inspired by that! And I can still do all of The Twa Corbies, except for two lines near the end which always elude me. Then Shakespeare, and the War Poets, and Edwin Muir’s The Horses, all thanks to school teachers. My father liked and wrote poetry and sometimes read it to me as well. And then song lyrics were a huge influence. I recently did that Facebook thing going round, 10 albums which made up my teenage soundtrack, and that got me thinking back to the lyrics which made the biggest impact: The Incredible String Band, Cat Stevens, Steeleye Span, Roy Harper, Pete Sinfield, Clifford T. Ward, and so many more.

My mother refused to give them money

for drink but buttered half a loaf of bread

instead, while their dog licked at my bare toes.

One wild night years later they set up camp

in the sorry huddle of grass and trees

across the road, their voices reaching me

despite the racket of the night, talking

arguing, even singing off and on.

I lay in bed, only a few thin yards

of wind and rain between us; and the quilt

I pulled over my head against the thought

of the old dog lying on the grass, cold earth

beneath him, rain on his back, worn collar

wet round his neck: our door, locked and bolted.

THE MUMBLE : Your first full collection was Even the Sea (Red Squirrel Press, 2010) – can we enjoy a couple of the poems.

ELEANOR : I’m attaching two, In the Mort House and The Tinkers’ Dog. Even the Sea came out in 2010, so obviously these poems are earlier than that. The Tinker’s Dog is biographical and fairly close to facts, so the poem was an examination of my conscience. Mort Houses were where they kept the bodies of the dead before burial to stop them being stolen by graverobbers in times when it was felt that the souls of the dead, and their chance of eventual resurrection, were also stolen with the bodies. It was inspired partly by a visit to a local half-restored Mort House where I learned about the burial practices in past times, and partly by the story of the French revolutionary leader, George Danton. His wife died in childbirth when he was away and he insisted on her body being dug up so he could be sure she was dead.

THE MUMBLE : What were the circumstances behind taking up the helm at StAnza

ELEANOR : I was in a Fife Women Writers Group, Kaleidoscope, from about 1998. We went up and took part at the Open Mic at StAnza one year, and then were asked to MC it the following year, and one of the others was invited to join the StAnza Planning Committee. When she had to step down, I was invited in her place, and the following year was asked to take over from Anna Crowe as Artistic Director. I shadowed her for a year before doing so, and then a few years later, we had a similarly careful transition when I took over from Brian Johnstone as Festival Director. It certainly has worked well for StAnza to manage succession in this way, and I can’t imagine how difficult it would have been had it not been a gradual thing. By the time I became Festival Director, I was very familiar with StAnza’s history, aims and objectives, and how things were managed and delivered.

THE MUMBLE : How do you feel the festival has grown under your stewardship

ELEANOR : StAnza has always been very much a team effort and so many people have contributed to how the festival has grown and developed, as have the funders and sponsors who have supported us and the various partners we’ve worked with. I have two guiding principles which have shaped how I’ve taken things. Firstly, it has to be enjoyable for everyone involved, the poets taking part, the team and volunteers, our audiences, the staff in the venues we use; and secondly it can’t just be about the poetry I like, it has to appeal across the board, and it has to be different poets each year. So we feature mainstream and experimental, page and stage, past and present. I think we’ve become more diverse as the years have gone on, so spoken word plays a bigger part nowadays, and we’re developed to use digital media in a way which wasn’t possible ten years ago. We’ve also become increasingly international in our planning and engagement. I’ve been very fortunate in being invited to festivals overseas both as a poet and as a festival director. The first time was in 2006 when I went to Poetry International in Rotterdam. I came back inspired and also determined to allow our StAnza audiences the stimulation and excitement of encountering poets and poetry and ideas from around the world.

THE MUMBLE : What does the future hold for StAnza, & will you be a part of that

ELEANOR : I’ve been working for StAnza now for 12 years. I hope I’ll be involved for a long time yet, but at the same time, I think it’s important that we continue our successful pattern of a gradual transition to ensure that StAnza thrives, and new ideas and new energies have to be welcome. So I hope that in a few years I’ll start to transfer some of my responsibilities to my successor as part of a planned transition. When that is completed, I’ll be cheering StAnza on, helping out as required, and there to enjoy the festival each March, but I’ll also hope by that time to have more time for my own writing which has taken a back seat since 2010.

In the Mort House

On calm nights when the sky

slips down to drape the land in black,

behind the Mort House shutters

in an outer room the widower

cannot stop his shivering.  Beyond

those grim sisters, time and sweet

to beat the body snatchers

His ears alone can hear

the resurrection men steal out

then earth, then flesh