An Interview with David Moffat

THE MUMBLE : Hello David, so where are you from & how did you end up in Glasgow

DAVID : I was born in Glasgow and brought up in a tenement in the Gallowgate near the Orient Cinema. It was a lively house (no one talked about ‘flats’ in the east end) with people coming and going all the time. I wasn’t aware of much formal poetry, Daffodils and Village Smithies apart, but from an early age I was exposed to the lyrics of Lorenz Hart, Cole Porter, Ira Gershwin etc, through Saturday night sing-songs in our kitchen. Of course I didn’t know then who had written the words I heard sung by, Jimmy Sinatra, Archie Crosby and Hughie King Cole, only that they were clever and memorable.

THE MUMBLE : So how did you become a poet

DAVID : In the late 1960s at Glasgow School of Art, I had a Liberal Studies tutor called Stephen Mulrine who had written a poem I really liked called The Coming of the Wee Malkies. He encouraged me to submit some poems for the Art School magazine called Folio. I did and they were printed. Liz (or Elizabeth as she was then) Lochhead who was a couple of years above me, was one of the main contributors this publication.
Fast forward forty years and I’m a retired Art Teacher remembering the bits and pieces of writing I’d enjoyed doing between the teaching, drawing and painting so I joined a Glasgow University creative writing group tutored by the excellent Donny O’Rourke. We wrote a poem on a given, intriguing prompt every week and then had it group critiqued. I did this for five years and found the experience incredibly stimulating and productive. Thank you Mr O’Rourke.

THE MUMBLE :  What were your earliest influences & how have they changed over the years

DAVID : I was in fifth year at secondary school when I was introduced to the work of Ted Hughes by my English Teacher. I loved it, especially Hawk Roosting. It opened the metaphor door for me when I was asked reread (how important is it to do that?) and consider the hawk not as a bird but as a symbol of fascism. What a light bulb moment that was. So the first poetry book I actually paid money for, was a Faber paper cover Editions (that’s what was written down the side of the cover) of selected poems by Ted Hughes and Thom Gunn. That introduced me to Mr Gunn and in particular ‘Blackie, the Electric Rembrandt’. A great wee poem whose title, unlike the rest in the collection, was presented in inverted commas. Why? I wanted to know why the poet chose to do that? As I get older I admire most those poets who can successfully straddle spoken word and page poetry. I saw Simon Armitage read at a Stanza event a couple of years ago where he walked onto the big stage to great applause. Ignoring the audience he placed his notes on the rostrum, slowly unscrewed the top of his bottled water, carefully placed it to the side and adjusted his papers. By now the silence was becoming uncomfortable. Then he started his first poem which to the best of my recollection went,‘We would like to apologise for…’ It was a poem about a delayed fight and the different grades of passengers waiting to board, from Platinum class all the way down to, was it Belly Button Fluff? I can’t remember. The point is he had used his silence to make the audience wait… then receive an apology in the form of his poem. So clever.

THE MUMBLE :  As a spoken word poet, how has the scene in Glasgow been evolving during your participations

DAVID : New blood is always needed. I read every month at Cafe Rio in Glasgow and there is nothing better than a fresh voice, young or old, at the mic delivering original material. It’s important that everyone who does spoken-word encourages new poets to join us.

THE MUMBLE :  Last year your poem, ‘Listening,’ won the Breathing Space ‘Year of Listening’ competition. Can you tell us about the process

DAVID : Dementia takes many different forms. In my mother’s case, in the early stages, there were lots of malapropisms or words she couldn’t bring to mind but she did want to talk. I realized that although I was hearing an opinion or story for the umpteenth time, she thought she was offering it for the first. That’s the difference I wanted to explore in the poem. I started with some of the actual questions she had asked me which in their own way were quite poetic.
‘Why is your face… thick orange?’ (I had a suntan.)
I found the best way to handle the many (often inconsequential) questions my mother would ask was to do so fully, as if I were speaking to a bright child. My mother might not have understood the answer but she was definitely aware I was engaging with her sincerely. Of course the answers I give in the poem are more considered than I could hope to offer in real time in a nursing home. Poetry allows you to consider what you want to say and how you want to say it. If I were granted a superpower it would be the ability to stop the world while I considered exactly what’s going to come out of my mouth next. In the poem I used an Ask and Answer format with crucially, the first and last questions being exactly the same to emphasise the circularity of the dialogue and represent the boundaries that limited my mother. The poem can be read on the Breathing Space web page.

THE MUMBLE :  What inspires you to write

DAVID : I can understand and to a limited extent appreciate the beauty in bucolic poems but they don’t get my juices flowing. I don’t care much for the polemic either, I know about bad things. I’m a town mouse who enjoys looking at and listening to people. That and ideas is what does it for me. No way am I saying metaphysical. 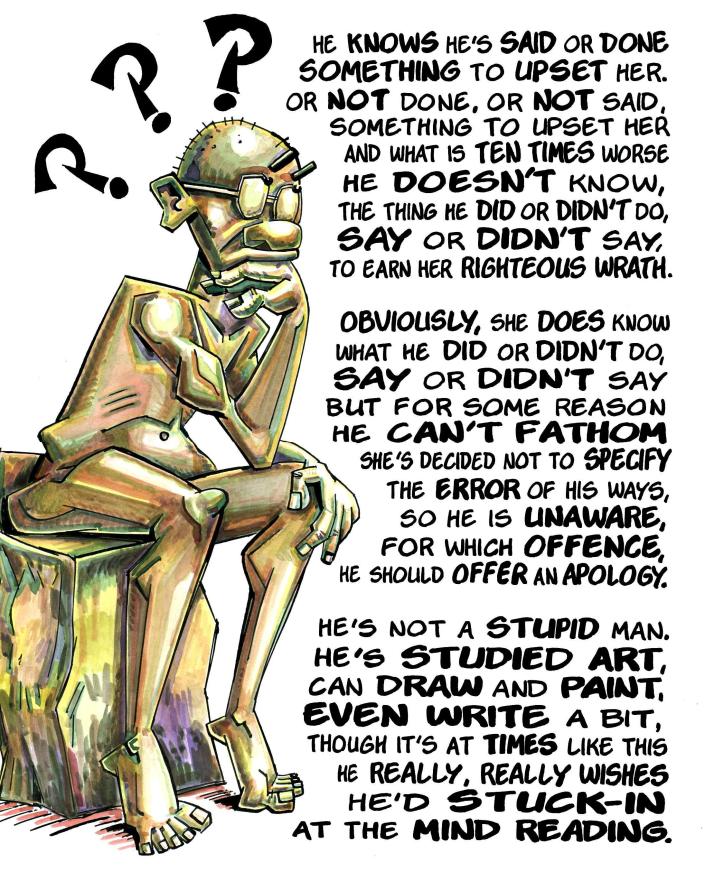 THE MUMBLE : Can you tell us about your poem (the spoken/read one)

DAVID :  I’ve found there is a bit of a friendly divide between page and spoken word poets. I like both. Massive Generalization Alert- I’ve bought pamphlets containing what was mainly spoken word poems and found they didn’t work on the page for me. Maybe that’s entirely my problem. Anyway when I’m writing for spoken word I try to be conscious of how that poem might be presented on a page. Maybe it’s best to show you what I mean.

Here’s how I read this ‘ironic twist’ poem

Pitiful as an ancient cur’s last yelp,
it fought hard to stir and gasp
a final inhalation
but proved to be past help.
I heard it die,
right there on the vinyl floor,
a fluttering where once a heart had roared.
No more sniffing nostril on the job.
No seeking out a flake of skin,
or tad of sandwich crumb,
that never made my gob.
Throughout a decade plus,
the flexing neck
skirted in my step
and a barrel chest
that owed me nothing
– bar a triage check –
was taped or glued
to pass each fitness test till now.
Replace and not repair I must.
My Dyson cannot suck,
it’s bit the dust.

Ha ha, you thought it was about a dug and it was really about a hoover (sorry I mean vacuum).

Nobody listening thought it was a Shakespearian sonnet but it was (albeit with enjambments). Printed on the page, exactly the same words look like this.

Pitiful as an ancient cur’s last yelp,
it fought hard to stir and gasp a final
inhalation but proved to be past help.
I heard it die, right there on the vinyl

floor, a fluttering where once a heart had
roared.  No more sniffing nostril on the job.
No seeking out a flake of skin, or tad
of sandwich crumb, that never made my gob.

Throughout a decade plus, the flexing neck
skirted in my step and a barrel chest
that owed me nothing – bar a triage check –
was taped or glued to pass each fitness test

till now. Replace and not repair I must.
My Dyson cannot suck, it’s bit the dust.

Fourteen lines of rhyming iambic pentameter with a volta.

THE MUMBLE : What is the poetical future for David Moffat

DAVID :  A few years ago I wrote an illustrated childhood memoir that no one wanted to publish so I did it as a Kindle book which has sold 3,000 downloads so far. It was a fair bit of work formatting the words and cartoons but well worth it (certainly in financial terms, I get 94p per download).

I have been told that no one wants a Kindle book of poems as everyone prefers their verse in a pamphlet and I think that might be the case. Nevertheless I’m putting together a virtual book of fifty poems along with some thoughts on why anyone would ever write a poem in the first place.
There are a number of reasons for doing going down the Kindle route.

1. It cost nothing but your time to publish the collection.
2. You don’t have to hump books around in the hope someone will buy them.
3. You can tell folk you have a book published and they can go online and have a sniff inside it.
4. It’s inexpensive to buy.
5. You actually make money from your writing – hurrah!