An Interview with Harry Giles

THE MUMBLE : Hello Harry, so where are you from & how did you end up in the Orkneys

HARRY : I’m from Orkney! My folks moved there when I was two, so it’s the only home I know. On Westray as a kid, and then Deerness as a teenager.

THE MUMBLE : When did you first realise you were a poet
HARRY : I was always a writer from as long as I could write, making up stories, and then somewhere around 19 or 20 I got really wowed by the power of performance poetry, after seeing a bunch of impressive performers at the Fringe. I loved how they held the stage, and the wild range of things they talked about. I wanted to be them! So I tried to mimic the slam style for a few years, and had some fun with it. Over the last five or six years I’ve developed more of my own voice, and it flits between page and stage. It’s only in the last year or two that I’ve turned round and looked at myself and said “Woah, I’m a poet now, aren’t I?” It’s a funny thing to tell taxi drivers. And all I mean by that is that I now seem to spend the majority of my time reading, writing, performing, theorising and organising poetry. As far as I’m concerned, as soon as you’ve written a poem you can call yourself a poet.
—

Dear Witches, A Charm for When You Need It

Take a burning memory, and tear

into as many pieces as your years.

Mix with strands of weed, pulled

into paste with spit, piss

or greeting: whichever is on hand.

And with the potion write

your true name in the place

where you need shelter: a wall,

a window, or, more likely, your heart.

I cannot promise you it will work.

I can promise your name will glow. 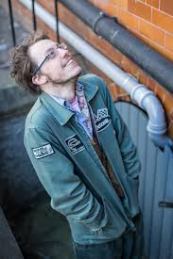 THE MUMBLE :  What drives your work
HARRY : Rage at the world and joy in language, for the most part. Writing’s where I get out the ideas and feelings that are bugging me, and is what I do to try and stitch the wound. If I’m upset about something, I’ll turn it into a poem and that seems to help. If I want to celebrate something, my brain looks to make a poem about it. But my ear and my eye just catch on phrases, rhythms, moments of speech — it’s like a hook’s stuck in my senses and I’m bothered until I can find the poem it’s trying to hook out. I could say more fancy things about politics and the potential of art to liberate, but really that’s all post hoc justification for that initial impulse. I feel, I hear, I need to write a poem.
—
THE MUMBLE :  Growing up on the Orkneys, how aware were you of the works of George Mackay Brown, & is there any of his spirit in your own compositions
HARRY : It’s impossible to escape GMB! And aye, he’s the one folk know best. But to be honest, my work’s very different: I’m more inspired by the game-playing and populism of Edwin Morgan and the sexy language-weaving of Jen Hadfield than GMB’s mythic-spiritual vision. I like the poetic voice of his novels more than his poetry, too: it’s looser, wilder there. From Orkney writers, I prefer the work of Chrissie Costie and Robert Rendall, who wrote extraordinary things in Orkney dialect — CM Costie’s stories in particular.
—

Thir ower mony girls, an that means they dance

but the teacher still caas the meuves tae the men

at the aisy grace o the girls wi the girls.

on Vince’s sweity back i the scrum.

ower tight, an both the beuys wunner

gin a faimly flitted tae the island wi a clutch

the ratio, wad they be mad tae dance thegither?

Wad they be able tae mak on tae complain?

THE MUMBLE :  You won last year’s Forward Prize for for Best First Collection, how does that feel?
HARRY : Och, I didn’t win! Just the shortlist. But that was absolutely good enough for me. (Plus the winner, Tipphanie Yannique’s ‘Wife’, is a great book.) It was bizarre, really. I hadn’t expected that kind of poetic mainstream approval, it wasn’t really on my radar as something that could happen. And it’s been an extraordinary boost to me just practically — it means some extra attention and interesting projects have come my way. Plus, I got to perform on the stage of the RFH, and I love a big stage.
There’s weird things about it too. If I’m writing close enough to the poetic centre to be approved of by the centre, does that mean my pretensions to subversion and radicality are a bit pretentious? Do I want to write more obscurely or more popularly, more edgily or more understandably? And cos the first book did well, it puts a bit of pressure on the next one. I’m trying, really, not to think about that: I like the first book because I was writing what I love and what I felt I had to write, and that’s how I have to make the second book two. If it’s lucky enough to hit a sweet spot where the tastes and preferences of a judging panel happen to coincide with mine, lucky me. Pobiz makes no sense, and nor does poetry.
—
—
THE MUMBLE :  You’ve come close to winning the Edwin Morgan a couple of times : do you enjoy the experience?
HARRY : Who doesn’t enjoy being enjoyed? I appreciated it very much! I especially appreciated being able to meet other young writers working in connected (but also different) ways. The first time I was shortlisted, that was when I sort of felt “accepted” by page poetry for the first time. I’d been doing slam for a long time and felt like a bit of an impostor in the published world. Now, it’s almost flipped around — I’m worried that the spoken word scene might find my dalliances with print a bit suspicious! I still love both.
—

Poem in which nouns, verbs and adjectives have been replaced by entires from the Wikipedia page ‘List of Fantasy Worlds’

You gor me. Boxen in your sartorias-deles

and angeous krynn. Too xanth, too zothique,

as though an erde of bas-lag were termina

under your hyrule. As though I were charn

I’m lodoss to your emelan blest,

like I’ll xen when you tortall my deverry tarth,

your eberron oz and aebrynis quin are still

spira. I nirn you. But faltha your athas

and then you can halla me. Og idris:

eidolon to pern me, tamriel! Harn me til

THE MUMBLE :  Can you tell us about Inky Fingers
HARRY : I founded Inky Fingers with Alice Tarbuck six or seven years ago. We started it because, at that time, there were almost no poetry mics in Edinburgh, so we thought we’d better make one. Things exploded from there. Lots of folk who’ve gone on to organise other events and be really important to spoken word in Scotland have been involved at some point or another! And now it keeps getting passed on to new folk. I’m not involved at all any more, and I’m so pleased and grateful that other people think it’s a thing worth continuing. We set it up to be a friendly and welcoming gateway to spoken word, so long may that continue.
—
THE MUMBLE :  What is the poetical future for Harry Giles?
HARRY : I’ve the next book coming out in 2018. It’s a lot weirder, both more direct and more experimental, with some good filth and rage in it. I’m working with Neil Simpson to finish off my spoken word and sound art show, Drone, which we’d love to tour later this year or next. And I’m studying for a (funded!!!) PhD in Creative Writing, so I’ve three years to research Scots, minority language literature, sci fi poetry, and try to make a new book out of it. I’m trying to concentrate more on a few bigger long-term projects than a lot of small, quick ones — but I can’t help but put out little things that interest me. I jsut worked with the game designer Molleindustria to put out www.protestgames.org, which pleased me a lot.

You can check out more of Harry at this link

One thought on “An Interview with Harry Giles”

[…] It has long been muted, out East Lothian way, to restore the ancient ferry route across the Firth of Forth to Fife. Still lost in idle burearocratic musings, I had to instead spin all the way the Queensferry Bridges, zip high over the waters & hang a right into Glenrothes, where the modern road system tapered into something from the 50s, as the one-lane roads wound me to the ancient &most reverend ecclesiastical capital of the Scots. Fife was as lovely as ever, a maroon landscape of recently ploughed fields under a crisp, blue sky. Crisp would also be an understatement – as would brisk – for the infernal furnace of cold which bit into my face & through my clothes as I arrived in Saint Andrews. Still things were hotting up in the poetry festival as I arrived at the towns refined town hall for my first sampling of this year’s StAnza festival. Like bees to the first crocuses of the year, poets & poetry lovers from Scotland & beyond were flocking to the fragrant blooms planted over the winter by Madame Eleanor Livingstone, including Harry Giles, who the Mumble had recently interviewed.  […]