An Interview with Bob Beagrie 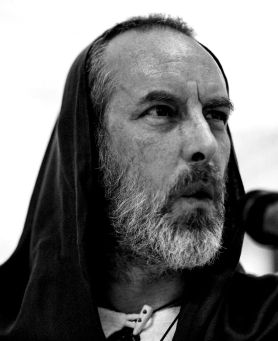 THE MUMBLE : Hello Bob, so can you tell us where you’re from & where you’re at, geographically speaking.
BOB: I am speaking to you from Middlesbrough, where I was born and raised and have spent most of my life. I moved to Crewe for in 1989 to do a degree in Creative Arts, specialising in Creative Writing, but moved back to Middlesbrough in 92. Middlesbrough is supposed to be the worst place to live in England. It has its problems, serious problems but there is a lot of good things here too. For one, it has a thriving arts scene and a lot of very talented people. It does tent to be ignored though on a regional and national level.

THE MUMBLE : So what got you into poetry in the first place
BOB: I wrote stories as a child and a teenager but it was attending a community creative writing workshop at a local library run by Trev Teasdel that gave me the encouragement to take it seriously, and I had a few short stories published in local magazines. Trev encouraged me to apply to do the degree at Crewe and Alsager College of H.E. It was there that I was exposed to poetry, e.e. Cummings, the Beats, the Black Mountain Poets, and realised it wasn’t what I’d always thought it was.
THE MUMBLE : What inspires you to write
BOB:  I am quite prolific because it is such a part of my way of perceiving the world and myself within it. If I don’t write regularly I start to fret and become irritable, so it is important to give myself the time to work creatively. I become quite obsessive over things too so I enjoy working on projects like Leasungspell and The Seer Sung Husband which require a lot of research and slow chipping away at an idea.
THE MUMBLE : Who have been your greatest poetic influences, in both early & present days
BOB: My greatest influences are Derek Walcott, Seamus Heaney, Elizabeth Bishop, Brendon Kennelly, Tony Harrison, Pablo Neruda, Allen Ginsberg, but I was very much inspired by some of the regional poets I’ve met and worked with like Andy Willoughby, Paul Summers, Tom Kelly. Andy Willoughby and I have been running an exchange scheme with poets from Finland for over 15 years so I have been heavily influenced by the Finnish poetry scene, which often has a shamanic Beat quality to it, poets like Esa Hirvonen, Kalle Niinikangas, Katariina Vuorinen and Riina Katajavuori.

THE MUMBLE : Your work has been translated into ten languages : can you tell us a litte more about this
BOB: Because of this connection with Finland I have been involved in a lot of international poetry projects and translation projects as well as quite a lot of international touring and performance work so I have had poems translated and published in other languages such as Swedish, Russian, Karelian, Estonian, Urdu, Danish, Dutch, Spanish. The collection I wrote with Andy Willoughby ‘Sampo: Heading Further North’ which is inspired by the National Finnish Epic ‘Kalevala’ was published in three languages in three different countries during 2015. I consider myself a European poet and think that poetry, and creativity in general, can act as a bridge that is able to span cultural and linguistic boundaries. The act of translation is a process of reaching out, a tentative grasping of potential meanings to be carefully examined and carried back into one’s own language, and enrich it. This process seems more important than ever given the rise of xenophobia and right wing ideologies over the past few years.

THE MUMBLE : You are a senior lecturer in creative writing at Teesside University, what are the key tenets of your teaching
BOB: As a senior lecturer in Creative Writing at Teesside University my approach to teaching is to encourage experimentation, creative play, to use your words as a vehicle for reflective practice, to strive to write beyond the habits and perceptions of the ‘self’ in a process of continual depersonalisation. That is not to say you shouldn’t write out of direct experience or a grounded idea of ‘self’, it is essential to do so but it is also vital to recognise that this idea of ‘self’ (authorial or not) is itself a discursive construct. Once students realise this through their creative practice they find it extremely liberating as writers.

THE MUMBLE : You are a founding member of the experimental music and spoken word experiment Project Lono, how do you feel the soundscape assists the spoken worD
BOB: I’ve collaborated with many musicians, both live and recorded, and it definitely brings another dimension to the spoken word, carrying layers of added meaning that can work conjunctively or disjunctively with the words. It doesn’t always work and its not for all audiences but when its right it can create a truly mesmeric and transformative affect. It also attracts and engages different audiences, many people who are not really interested in poetry can be hooked into it through a more integrated or combined arts approach. Someone once said after listening to a Project Lono track, ‘I’ve never liked poetry but hearing it with the music helped me really appreciate and understand the words’.

Project Lono is an experimental collective on Teesside that encourages collaboration and cross fertilisation of the arts. I also think it is important to remember that poetry in tribal times was always accompanied by music, sound effects and its physicalisation through dramatic movement / dance. Meter is measured in feet because it relates to the ritualised steps that accompanied the words.

THE MUMBLE : What are you bringing to the table at this year’s Stanza festival
BOB: I am delighted to be taking part in the Stanza Festival 2017 as part of the National Tour of Leasungspell: A Fool’s Tale, which is a performance of parts of the epic poem that was published by Smokestack Books in 2016 with live music and sound effects by lutenist Peter Lagan, singer Sara Dennis, with Kev Howard playing Dordeseal (ancient Celtic horn and various percussion instruments and Tuvan throat singing, and Stewart Forth on percussion and keyboards and recorded sound effects.
THE MUMBLE : What does the rest of 2017 have in store for Bob Beagrie
BOB: Throughout the rest of the year we will be touring the show, with performances lined up in Bamburgh Castle, Durham Cathedral, Whitby, at the Castle keep in Newcastle and at Bristol Poetry Festival. Wyrd Harvest Press will also be publishing a new collection of poems I have written with Jane Burn, titled ‘This Game of Strangers’ which is inspired by the Gwynevere & Lancelot legends so hopefully we will be holding some readings and launch events across the country.