A Second Slice of StAnza 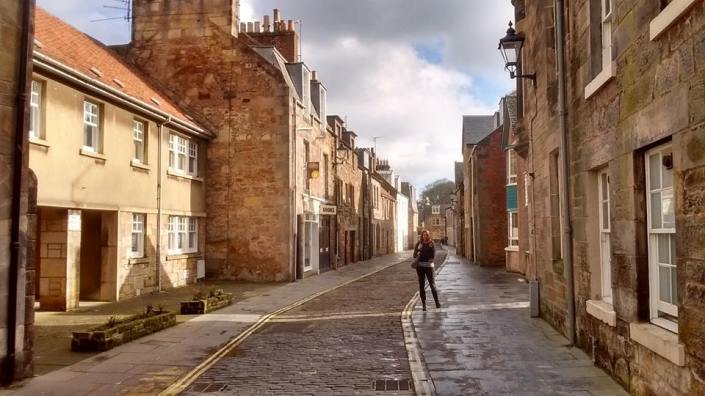 Like some dandified arriviste in the throes of burgeoning womanhood, StAnza retains a sprightly ebullience every year. I think this is down to the policy of not asking poets back to perform or lecture until five years had passed. This helps keep the festival al fresco fresh, & tho’ the faces may seem familiar, one is always guaranteed a certain newness to the bill. So a second slice of StAnza for me this time round would be rather like sampling one of the splendid Taster Menus at the Castle Terrace in Edinburgh, where plate after delectable plate is served up full of aesthetic glory & supreme tastes. Rather like a very good poem.

It was the weekend & so the wife was free, & off we pottered on the Saturday night, a thick haar covering both East Lothian & Eastern Fife. Inbetween, of course lay the clearer Forth Bridges, but it wasn’t a long drive at all, arriving just in time for the slam in the main auditorium of the modernistic Byre’s Theatre. Ten poets had two minutes each to impress the judges, all ushered into place & eventual silence by the brilliant Paula Varjack, a young, internationalist poet, who set the scene & dictated both pace & rules with the elegance of Virginia Wolfe at some High Tea soiree. ‘This is how it works, & we’re gonna have fun doing it,’ was her mantra, & we were all hooked from the off. The winner was Kevin McLean, one of Edinburgh’s famous ‘Loud Poets,’ who’d saved his best piece for the final, blowing away the opposition with his speed of thought, his philosophical realities & intrinsically musical wordplay. A close second was Jill Abrams , who chose something with more pathos for her final piece, at which end an ‘O My God,’ from the audience reflected how deeply she moved us.

It was midnight by now, & me & the wife parked our car up a few miles down the coast by the sea. We’d taken the seats out of the back & stuffed the car with duvets, & it was comfy enough for a pleasant night’s sleep. On waking, we parked up at the local leisure centre for a jacuzzi, swim & sauna, & when we found ourselves upstairs at the Byre’s Theatre at 10AM drinking coffee & nibbling on some fruity pastries for the morning’s breakfast lectures, our B&B in St Andrews had cost us £7 each. The sixteen-year-old Rimbaud would have been proud. There then followed a delightfully informal, but highly informative talk from four translators on the nuances of their chosen aspect of poetrology.

Asterixesque Jean Portante & the well-preened Zoe Skoulding are bosom-buddies. Jean is from Luxemburg, whose native language is Italian, & whose chosen linguamedia is French. He explained how he was importing the smooth-flowing Italian river-phoneticism into his French verses, with Zoe explaining how her English presentation of his poems were trilingual, having to accommodate Italian rhythms & French vocabulary into the register of her own native speech. Equally fascinating was Aurelia Lassaque, a speaker of the rare Occitan tongue, who spontaneously creates her own poetry in both French & the language of her mother, writing a single poem in tandem between the two languages, letting them flow into & bounce off one another.

Finally, we had the most erudite Jacques Darras, who could have talked for hours, & indeed wanted to, but instead gave us an anecdotal sweep through his time with Ezra Pound’s Cantos, finishing with a moving pilgrimage to Pound’s secretary, Basil Bunting, living in a shed near a pub, a couple of months before he passed away. “Translation, basically,” said Jacques, “is an act of love… you have to love, you have to be in love, with a poem you happen to chance upon,” a statement which perfectly captured the essence of the hour.

It was now potter time; a meaty cappuccino at Costa Coffee, photo-ops with the wife in the time-capsule streets, before buying a translation of all of the Gawain Poet’s works (if indeed he did write them all). Then it was back to the Byre’s for a pie, a pint & Mr Steve Pottinger, a gentle though political soul, who glided through his lunchtime recital with a perfect rectitude to his muse. The West Midland accent never sounded so good, as the breeze of Parnassus blew through his poems, all of which ended with an epithetical flourish & an almost Elizabethan bow. Yes, Mr Pottinger was good, very good. Both before & after his performance, I’d noticed the morning’s translator posse were sat in the Byre’s, pontificating & all that, & I am sure that on our exit from Mr Pottinger’s pearly sphere, Jaques was telling the same story I heard him begin when we first went upstairs for our pies. 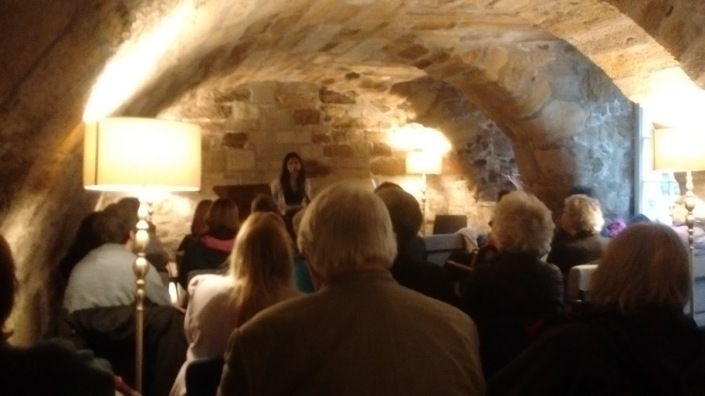 Our final port of call was in the cellar-like confines of  the intimate Undercroft at St John’s House, where two ‘Border Crossings’ poets would read through their work. The first was Tess Taylor, a Fulbright scholar & direct descendant of Thomas Jefferson. Reading with poise, posture, & the occasional touch of humour, she delivered excellent renditions from her folklore-laden, landscape-littered work, especially the long poem which had her exploring her ancestors house, peering into his copy of Virgil, & displaying an oboe-pitched sentiment which tweaked & twanged with effortless grace on the listening sensibilities. Finally, we had Michelle Cahill, a young Australian of Indian heritage in love with Scotland, who eked out the vibrancy  of the land in her recently acclaimed book, The Herring Lass. I especially liked her sonnet to the heroine Black Agnes, defender of Dunbar Castle a long time ago, & a place we headed in the direction of at the climax of her deliciously engaging readings.

One thought on “A Second Slice of StAnza”

[…] loved reading in the Undercroft from The Herring Lass; and it was lovely meeting Tess Taylor, poet and Fulbright scholar based at […]