An Interview with Hannah Lavery

This weekend, Dunbar’s COASTWORD festival shall thrive once again in that glorious corner of the Lothians. The Mumble managed to catch a wee blether with organiser & poet, Hannah Lavery; 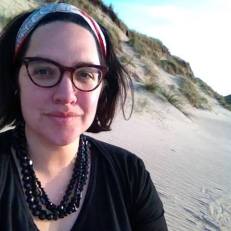 So where ya from & where ya at, geographically speaking
I grew up in Edinburgh and moved to East Lothian ten years ago, settling in beautiful Sunny Dunbar.

So when did you first realise you were, well, a poet?
I am not sure I am there yet. I write. I have always been making up stories and playing with words and rhythm. Poet seems such an earned title or better a given one. I write poems, plays, stories- I am that. I do have a memory of composing a poem on a long car journey when I was about 10. I was with my Dad and as most children of divorce this meant not with my Mum, and I wrote about telling my missing to the star I could see out the window, but quietly so not to let my Dad hear. Writing poems, must have first been a place for me store my secrets.

Which poets inspired you at the beginning & who today?
I grew up with music played in every room and on every journey. My mum loved the theatre too and as a single mum she would bring me to everything. So Chekov, Shakespeare, Lorca, Joni Mitchell, David Bowie, Paul Simon and then later I discovered Maya Angelou and then Jackie Kay. I eventually, became an English Secondary teacher and I loved teaching Dylan Thomas and the War poets but my love of poetry and I think my desire to write it, comes though from that early love with music and from Angelou and Kay and in all those poetry books and anthologies of feminist poetry I would save up for and buy from Word Power in Edinburgh.

in all the photos

and whilst they cooed over the boy you were,

after khow and chicken curry

with a cigarette taken from my almost sister,

another from your almost third wife, a rum to go

and with a last look back, I took what I had had

and threw it to the wind.

It did not go but settled instead to be cinders on my back,

it followed me home.

What are the best conditions for you to write your own poetry under.
I am not sure, used to be wine and heartbreak but I am a mum and it is more in the spaces between all that duty- from beneath the washing pile. I walk a lot though, in the woods, by beaches- I am lucky to live in Dunbar. And I find that poetry and stories happen in my head – later it stumbles to the page.

You are clearly a family woman – a husband & three kids, right? – how do strike the balance between familial duties & poetic creation
I am mother to three beautiful wondrous children and my husband and I have this treasured busy and crazy full family life. And it is inspiration. And yes, it is obstacle too but I do have a corner of my own and a husband who respects and supports me. We are partners raising our family and in supporting each other to have dreams outside of them too but I crave more time, more silence, less housework and I have learnt to write in the noise and the bustle, in the untidiness. I have learnt to live with the guilt of being distracted. As a mother. As a writer. As a wife.

What do you like to do when you’re not being either a poet or a mother – for recreation
We have a campervan and there, of course, I am still mother and still a writer but a more spontaneous and free one. I sit and walk and play and fill up notebooks but I am never not one of these things. Never not. And this time is so fleeting and I love it- not the chores, but them and being a gang together. My writing is inspired and powered by them mostly.

at the edge of you,

Can you tell us about Coastword, its inception & its evolution
CoastWord started as the wee festival in words, and part of Dunbar Civic Week in 2013. It began as a conversation in the school playground. There is still much planning in the playground but over the years we have developed into a much bigger festival but still with the ambition to create something from our community which celebrates Dunbar and its folk and welcomes others to be inspired by our town and share their work in an intimate, friendly and supportive space. We have been lucky to have been supported by East Lothian libraries, The Dunmuir Hotel and Creative Scotland and have partnerships with Scottish Poetry Library and Dunbar Reads Together. CoastWord is a such special few days and something I am so proud of being involved with. 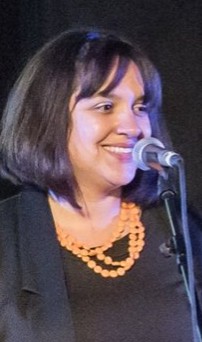 Who do you have in store for us this year?
We have loads! Poetry with Magi Gibson, Jenny Lindsay, Scott Tyrrell, Colin McGuire and many more in a special Spoken Word and Music night and in events throughout the weekend including a CoastWord Big Breakfast with Katherine MacFarlane and Julie Hogg. We have theatre with Village Pub Theatre and Jenna Watt’s award winning play, Faslane. Authors Val McDermid, Christopher Brookmyre, Janice Galloway and Shelly Day. Music from Faith Eliot, Kirsty Law and Dunbar Sings. Along with new work from our Writers in Residence 2016-17, Catherine Simpson and Kirsty Law.

What does the rest of 2017 hold in store for Hannah Lavery
I have been fortunate to have received a Megaphone residency from Workers Theatre and will be sharing my work The Drift in June at their pop up festival in Glasgow. I am also proud to be part of the Writing Mums Anthology, Nourish Me, Sister, which will be launched at CoastWord. This year will also see me working on my first pamphlet of short stories to be published by Post Box Press in 2018.

I am also looking forward to working on some workshops with North Light Arts and the Ridge Project in Dunbar. And of course, I will be working on CoastWord 2018.

My hand reaches in.

She needs a wee!

He opens the door,

the boys push and

He comes at us

I am barely home

and you are before me

Coffee is being made.

I dodge an arrow.