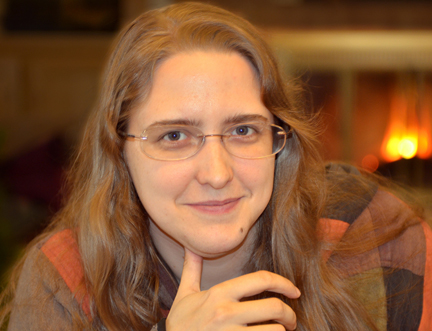 A panel of award-winning science and speculative fiction writers from both Scotland and the Americas blended their diverse perspectives for a fascinating conversation around speculative fictions imagining hopeful futures. Ada Palmer is a historian from Chicago who’s just published Seven Surrenders, the second in her Terra Ignota series. Jamaican-Canadian Nalo Hopkinson is the author of novels Sister Mine and many others. Representing Scotland were science fiction writers Ken MacLeod, author of many books including the Corporation Wars series and Leeds-born Edinburgh writer Charles Stross whose latest book is the Delirium Brief.

The Bosco Theatre is a circus style tent which is a new addition to the Book Festival, allowing its expansion into George Street. It can be noisy and a little distracting, as the tent flapped noisily in the breeze and allowed the sounds of Friday night revellers to intrude on the conversation. However the quality of the debate and the well-regulated and careful chairing by Pippa Goldschmidt made it a great experience. The first question to the panel from the chair was what each of them considered a utopia to be. Charles suggested that rather than a utopia being prescriptive, it was ‘simply’ an inverse of the golden mean; basically a system that minimized harm to others. Nalo referenced Thomas Moore’s Utopia, written in 1516 in Latin, and said she was suspicious about any utopia that included slavery in any form. That utopia was always an evolving process, which must include thought about how citizens can and should get along with each other. Ken used California as an example of a place that could be a utopia for some and a dystopia for others, with its over reliance on automation keeping us from our full destiny as useful and well-rounded humans. Amy agreed on the fact it was subjective, that it is necessarily a moving target because it has to feel better than our present reality to be regarded as a utopia.

The discussion moved on to how inclusive a utopia should be. It is generally regarded amongst science fiction authors and readers now that artificial intelligences should be afforded the same respect as human beings. Should this be anyone or anything the reader recognises as fully human? Or should we not anthropomorphize things or animals but just extend the boundary of what we should pay full respect? Did the authors feel a pressure or expectation of them as authors in this particular genre to explore and create visions of utopias? Nalo said she had her own personal expectations of herself in her writing. However, it was sometimes problematic. Using her novel Midnight Robber as an example, she suggested that the plot has to steer the characters into struggle and strife in order to fulfil the conventions and expectations of an exciting story. One strategy is for stories to take part outside the main culture, like in Star Wars, so that the utopia becomes as a reference point for any dystopia. Ken comes from a well known political background and his novels often reflect themes of exploring possibilities of communist and anarcho-capitalist ideas. He feels that there is a strong pressure to create the possibilities of utopia in people’s minds, seeing as it’s currently easier to imagine the end of the world than the end of capitalism, drawing chuckles and agreement from the audience. He turned down involvement in a recent project for a graphic novel set in Scotland, as the rest of the contributors were fixated on imagining a ruined, flooded, dystopian Scotland, and he felt that he didn’t want to plant this in the imagination of young readers.

They broke down the distinction of utopia as either and adjective or a noun and took the examples of Orwell’s 1984 and the immensely popular Hunger Games series for young adults. Ken pressed the need to look carefully at the message of hope in the book, as although the Hunger Games is set in an extreme dystopia, the heroes successfully fight and win against it. They suggest the future of speculative fiction lies in looking at other cultures to bring fresh ideas and rework old mythologies, and that this kind of fiction often has to capture a particular point in time to be effective. Nalo discussed the impact of Japanese science fiction after the devastation and US occupation after the Second World War, featuring the iconic Astroboy, the original hero of science fiction. Intensely political, with utopian ideals prevailing despite a devastated landscape, but using veiled language to describe their oppressors. It was a unique generation involving international teamwork that gave it such a powerful focus. His name was even mentioned during a 2007 UN Peace conference, as people proclaimed ‘Let’s make a future that would not make Astroboy cry!’

The discussion moved to whether the role of science was essential in a utopia. Ken’s ideal being more of low tech ecotopia, where technology is necessarily limited, and work shared. However, in order to be credible for modern readers, it has to have a base level of necessary machinery to cut out the most difficult and energy-consuming labour. As they quoted historian Mary Beard, machinery for food production is indispensable, given our swelling world population, but brings up a very important question of who does the most disliked labour? Isn’t this the base of most of our inequalities and power struggles in all our societies? And what happens if a machine becomes your peer? Ken referenced William Morris as offering us a Marxist depiction of a utopia of a new England after a revolution. Nalo told us about her story Soul Case being influenced by the reality of the Quilombo, a Maroon (runaway slave) society in Brazil that managed to create not just an autonomous but a fully welcoming and inclusive society.

Ada points out the way that we draw on and feel nostalgic for certain periods in history is important, reminding us that the future is going to care about our present as it looks back in time, and decide why there should be a level of respect for ideas and arrangements of people in society. Nalo made the point that we should think about technology in a more expansive way to include song, which I thought was a fascinating idea. The elaborate systems of oral history that has been so important across the world in keeping traditions and history alive, is a technology in itself. As she suggested, if all the libraries burnt down, griots would be able to use the powerful medium and system of song to pass down history through the generations, placing its importance on a level with what we in the West refer to as ‘technology’.

Science fiction is a huge role to play in not just affecting politics but also inspiring scientists and social scientists, and a great way to discuss the ideas inherent in the concept of intersectionality. The audience members all looked liked they’d just left a meeting of Mensa, also asking further incisive and brilliant questions, and I was hugely inspired to start to delve in to the world of science fiction, joining the rest of the well informed, enthusiastic fans in the audience. I feel that I have been missing out for too long.