Birth of a Poet 1: The Orient Express

It is 20 years ago this week that I returned from the Continent as a poet. I had just been deported from Switzerland for apparent vagrancy, but unbeknownst to the Swiss I was trying to get home anyway. I have always put my lucky break down to the ways of the Muses, who had recently taken me under their wing. Landing safely at Heathrow, in my possession was what I call my first proper poem, 100 stanzas of Ottava Rima upon the Death of Shelley. After two weeks of touring Europe as far as Hungary, I then headed to Italy, Shelley’s own ‘Paradise of Exiles’ where I began my composition period in Pisa on the 16th April; concluding the poem by Shelley’s tomb a month later, at the Protestant Cemetery in Rome. In between was the the great moment of validation in my life, sat on a clifftop over Portovenere, composing to the gulls & the sunset. Like a young Wordsworth over Helvellyn, I too knew I was a poet & parley to the especial feelings of universal inclusiveness which being a true poet entails. 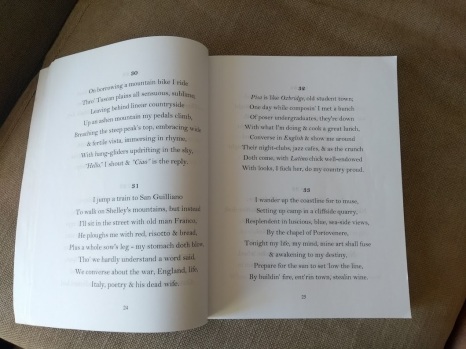 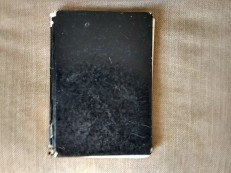 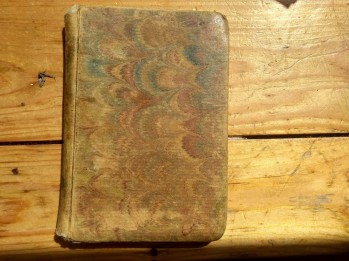 Those six & a half weeks of travel was my very own Grand Tour. I was no aristocrat, far from it, a little half-caste drop-out from the back streets of Burnley with sudden pretensions of poethood. I should have been better off in a factory like the one in Rawtenstall I’d worked at for 3 months or so in 1996 – the shoemakers Lambert Howarths. But I was, of course, a poet, for a poet is born… & then made of course. Having realized this was my fate in early 1997, a year later I embarked for Europe where I hoped to experience for myself just a sliver of the literary domicile in Italy which Byron & Shelley had set up in exile. Just what kind of poet I would turn out to be would be heavily influenced and nourished by the experience. My only source of income, however, would be the rent money I neglected to pay in London, & whatever I could whip together in the Italian streets thro’ my guitar.

Tis the end of March & my rent is due,
But two life options lie open to me;
Break with a lover, lose friendship, split thro
Or chain myself to the servility
Of capitalism; a poet true
I yearn to be, so young, so sure, so free –
Romancing my mind with poetry’s flow,
So be it, with sure brave heart, I shall go.

“What the fuck am I doing in Hungary!?”
Think I as I search for somewhere to rest
In the dirty, bustling, car-choked, friendly
Bullet-hole-wall-lined streets of Budapest;
Architecture touched clearly by Turkey,
But laced with the consumeristic West;
I find the Mellow Mood Hostel – what luck!
For four pounds a night it’s as cheap as fuck.

My retrospective adventure begins on the 11th April 1998. I awoke in a hostel upon my last morning in Budapest, set later that day to attempt to evade fares, or trainjump, to Slovenia, from where I would head for Venice. To tell the story I shall be recreating my journal from the period day-by-day & placing this alongside any actual compositions of the Shelley poem on those corresponding days. The latter have gone through a revision process over the years, & I hope to administer them through the powers of the 41 year old poet. Pictorially, I have included a smattering of sketches from my notebook made during my time in Italy, plus a number of photographs taken in my visits to the scenes of my youthful endeavor in the two decades since. My final piece of ‘evidence’ comes from 1999, & another poem in more precise Ottava Rima concerning my trip to Europe, entitled The Grand Tour. Despite misplacing the original manuscript, this poem too has undergone several revisions & now takes pride of place at the commencement of my Silver Rose sequence.

My last day in Hungary began quite pedestrian paced, then ended in the most bizarre circumstances.
I cooked up a few eggs, mushrooms & a bit of bacon for brekky, then began to meander. I changed some money, bought a load of fags & food for my journey (I’d better watch my cash now, only got £90 left), then found some Hungarians playing chess in a square. I had a few games with a big fella who fluster’d me into losing!! I lost 400 florins altogether, but had a grand time in the sunshine.
Then I met Megan one last time & we had a few beers through the afternoon til my 5.30 train to Slovenia. After donning my electric blue sunglasses I gave an impromptu performance of songs; Hymn to Apollo, Tumbleweed & Groovy Little Sunshine – laid back in the sun at the top of an international hostel, kinda tunes – with Fools Gold as an encore. 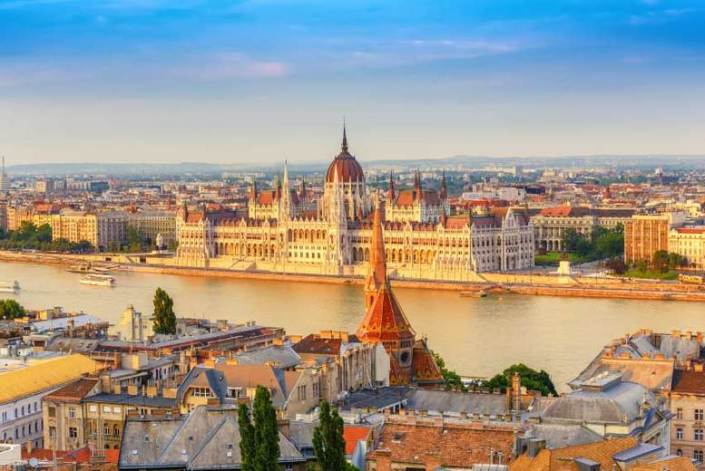 I then packed & headed for the station. Now Geminis are known for their indecisiveness & sudden changes of plan, & as soon as I saw the ‘Orient Express’ to Paris listed, I had to get on it. That train is second only to the Trans-Siberian railway for legendary routes, & if I jumped it I would be very happy indeed. But a big conductor actually opened the toilet door, took my passport & kicked me off at Gyor (giving my passport back).
But this wasn’t too bad – I quickly got on a slower Hungarian train to the border town of Hegyeshalom. Although the toilets (& the graffiti-splattered, full of weird Hungarians carriage) were disgusting, the bay-like window was wide open & I had a wonderful, snail-paced view of the Hungarian plains, which were pretty dull, but the evenly spaced houses & churches were quite pretty. 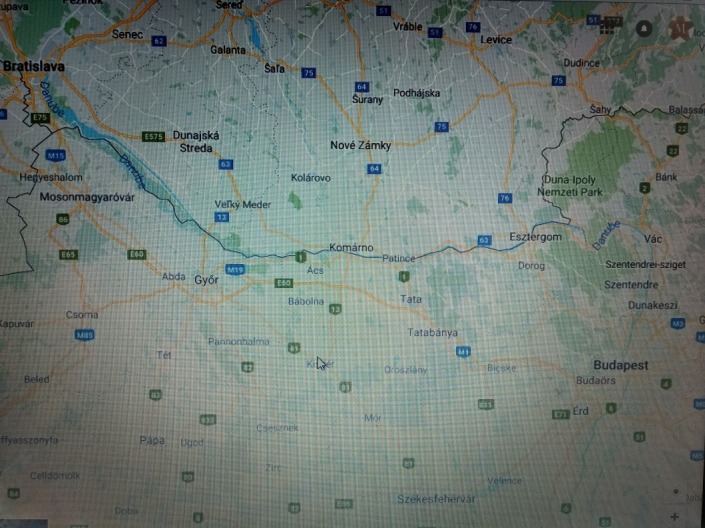 So I arrive in the border town (its too long a word to write out every time, accurately) & lo & behold, who’s waiting but the conductor from the Orient Express. He waves his arms for a bit, gets a bit kerfuffled, so I slip the station, having two hours to wait for the next train outta Hungary.
I bought a soft drink & sat outside a mad Hungarian pub, their weird babble drifting to my ears & adding to the surreality of the situation.
Here I planned ahead! I will travel to Italy & Ravenna to see Dante’s grave, then over to Le Spazia to write poetry & chill by the beach for a couple of weeks. Then I’ll hit the Riviera, do some busking & slowly make my way up through France – walking, busking – to arrive home for my birthday (June 11th). Perhaps I can get a ferry ticket for my present!
I returned to the station, but that same conductor (& the one from the other) accosted me, demanded money & took my passport. They sat me down & waited for the Vienna train to come. Two of their cronies arrived & they began making fun of me, pretending to be soldiers & going ‘English very bad, rat-a-tat-a-tat’ Nobs! The Vienna train came & as it pulled away they all began to laugh. So I slipped on my shades, whistled Rule Britannia & high-tailed it on outta town.
I was like a soldier marching along the road to the border, my backpack heavy & my guitar like a gun. I felt so funky, tho,’ that I decided to strum by the roadside, only a few hundred metres from the border. After a while I saw a car coming & thought I might hitch outta Hungary. So I leapt to the road, stuck out my thumb, & to my surprise the car screeched to a halt & two guys in camouflage & holstered revolvers quickly leapt out. I thought at first I was gonna be mugged, but was quite relieved to be in the company of some border patrollers. They had a quick look at my passport, then bundled me into the car & drove me back to the fucking train station again.

There were about ten guards in all, proper dumb-looking & pretending to be hard, so I made the chambers feel like home. I ate, had a fag, then bought out mah geetah, & whistled & played til they gave me back my passport. I played some weird shit & spooked them – & they wouldn’t even give me a stamp as a souvenir.

I gaze on familiar boyhood star
While I walk a few K to the border,
As just by the line I thumb a police car,
They bundle me in, “Silence!” the order,
So as they check the passport my guitar
Rings out in bizarre tuning & coda,
Bemused they release me at the train station
“Gizza lift” “No!” my tour’s first frustration! 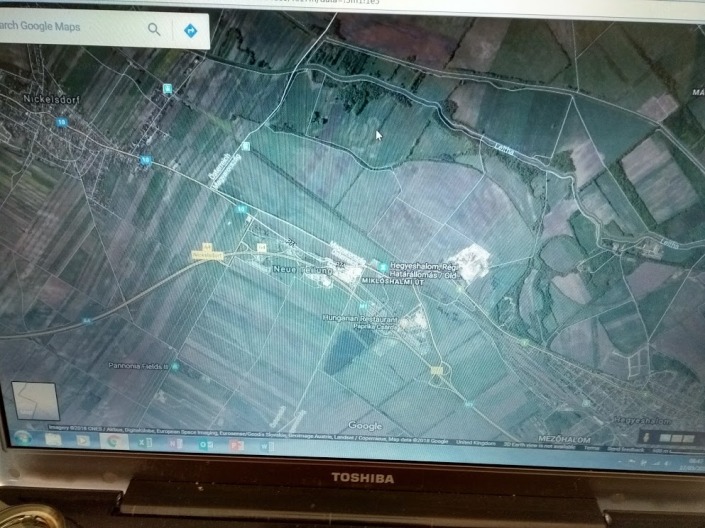 So I had to retrace my steps, & soon was making my way though the border zone. The Hungarians guards were asleep so I had to wake them! I passed some lads younger than me, wielding rifles & a big Austrian at customs. The actual area had a real sort of abandoned feel. The legacy of the Cold War – it was the East-West border – where only kids & old men inhabit. It was quite eerie walking through it into Austria.

In Austria I was manhandled by some guys who thought we were still in the war, then another guy on a bike, but all-in-all it wasn’t too bad… just 7 passport checks & ten or so kilometres of hiking.

I found the station at Nicklesdorf & bedded down behind it. Luckily it was a very pleasant night & I fell asleep to birdsong…