An Interview with Imogen Stirling 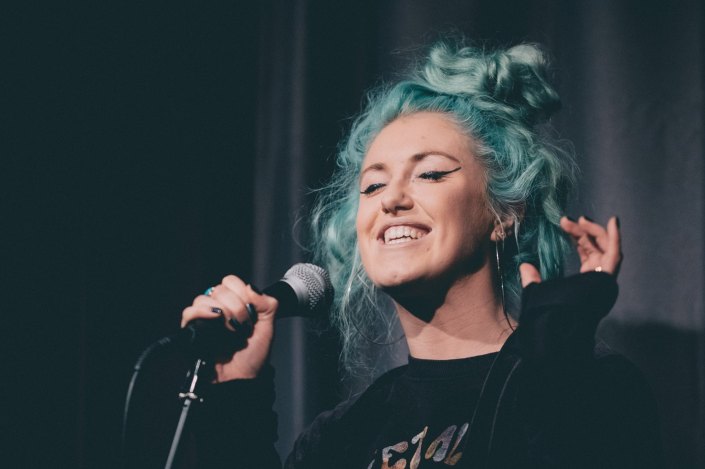 Who is this Imogen Stirling, who is breaking over the Scottish Poetry Scene like a sudden Tsu-Na-Mi? The Mumble managed to catch her for a wee blether & find out…

Hello Imogen, so where ya from & where ya at, geographically speaking?
Imogen: I’m originally from North Berwick, a small town just outside of Edinburgh, and have since spent a long time living in Glasgow. I’ve also traveled a lot, mainly through music work, and have lived everywhere from Germany to the Canary Islands.

You have a background in musical theatre, so why the shift to spoken word?
Imogen: My roots will always be in theatre and music and I’m currently planning projects which really merge all three art forms. However, when I was solely working in musical theatre, I began to find the genre quite stifling in that you’re always performing somebody else’s material. Transitioning to playing in a band brought more creative freedom but there’s still that constant audience demand to hear cover songs. It just wasn’t me. Spoken word gives me complete autonomy over what I perform which is liberating. I find it a very exciting and malleable art form because it allows me to draw upon various genres to find a balance that feels right, so forming a show and performance that is creatively unique and very much my own.

You’re really enjoying quite a shooting star ascent into the Scottish poetical stratosphere, are you enjoying the journey?
Imogen: I certainly am! It’s been a whirlwind. I’m very driven and knew from the outset that I wanted to find success in spoken word. It’s required a lot of work on my part but has paid off as, in less than a year performing spoken word, I’ll have put on my first full length show, toured the UK, and performed at some major festivals. The effort is cushioned by being part of such a warm and supportive community. There’s a unique sense of camaraderie that motivates my work.

Which poets inspired you, both old skool & today?
Imogen: I have pretty eclectic influences, and a lot of them come from outside of poetry. I first drew inspiration from music – the lyrics of Leonard Cohen, Alex Turner, James Taylor. I’m a Kate Tempest girl through and through, her work brought me into poetry and consistently drives my performance. At university, I was taught by both Kieran Hurley and Kei Miller, between them they demonstrated the way that theatre and song can emerge through poetry and I still refer to them to hone my vision today. I’m a big fan of Jahra Rager who fuses contemporary dance with poetry to create some of the most blistering work I’ve seen. Ocean Vuong is a beautiful page writer and a useful foil to the more extroverted performance poets. I’ve found myself working alongside the most incredible talent in my current project: Piers Harrison-Reid, Zoka, Thomas Wolfe, Tamar Moshkovitz, Minty Taylor, Rob Carnie, and Billy Pilgrim with The Heartsease Kid. The diversity and sheer quality of the work they produce keeps me on my toes and encourages me to push my writing.

Everybody wants to be a hipster
I come home, different’s taken over
And I adore it

Everybody wants to be a hipster
I come home, different’s taken over
Time for my go at breaking this mould
I dye my hair
I get the piercings
Start writing poetry
Learn how to tarot read
Know which wine is which and
Which coffee to ditch and
I think I could get used to living like this

Everybody wants to be the most hipster
I come home different’s taken over
And grown addictive
Whose beard is the longest
Whose man bun the tightest
Who’s the best read
Knows their Hamlet from Titus
Don’t know what the goal is
But we’re all chasing it
Topping the craze and the craze and the craze and it’s
All competition
Post-modern ambition
It’s all a distraction
Isn’t it?

Because something is missing amidst it
We inflate the gravity of this dress up game
Engage the safe space to exercise difference
To learn to talk recite and proffer
But not to offer any real substance
Seems unconstructive, seems over indulgent
Seems underwhelming, seems empty headed
Seems where is the empathy
When we resort to trending hashtags to mitigate apathy
Seems appearance has superseded moral integrity

When do you know you have just composed a decent poem?
Imogen: To be honest, it takes a while. I’m a very harsh critic and need to have a piece well received by an unknown audience before I believe in it. A lot of what I write is political and intended to motivate a response from a crowd so it’s hard to judge its merit purely by my own opinion. That said, I’m at the stage now where I can recognise when a piece of mine is creatively strong – for me, it all comes down to flow, wording and clever rhymes. It’s quite mathematical really. But I can’t judge the overall impact of a poem until I’ve performed it live.

What is it about performing your poetry you love the most?
Imogen: How much it seems to affect people. The responses I get from folk after performing poetry are so different to that of a theatre or music audience. Perhaps it’s because poetry is so inherently personal, perhaps it generates a more emotional response in a listener. Whatever it is, it’s special to see the way words can communicate. And plus, it’s exciting. Performance poetry is so dynamic, such a show, and has the potential to be quite interactive – you can see who is responding to a piece, you can speak directly to them. 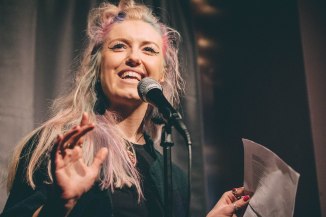 Can you tell us about Words w/ Friends?
Imogen: Words w/ Friends is a collective of poets working with producer, The Heartsease Kid, to creative innovative collaborations of lo-fi hip hop and spoken word poetry. We’ve just released an album, Words w/ Friends vol. III, which we’re touring around the UK in July. By fusing the genres, we;re aiming to heighten the accessibility of poetry through creating an art form that appeals to more diverse audiences. We want to re-establish the relevancy of poetry for a modern crowd.

What does Imogen Stirling like to do when she’s not being, well, poetic?
Imogen: I like to travel. Once the Fringe is done, I’m keen to get back to the Canary Islands, practice my surfing and my Spanish, find the sun. I’m a vegan activist and write for Vegan Connections, it’s great being involved in such a proactive and important movement. I love theatre – both performing it and watching it. Spending time with friends, drinking wine, discovering new music.

Nicolas died in Somalia
When I met him we were both staying
In Gran Canaria
I told him he reminded me of my brother
Both fiercely determined and destined to be doctors
He said is that right
He said
Your brother
Must be smart, funny and handsome too then?
I laughed and said yes

The Mumble caught you performing at Eden festival last week. Where else will your words be winging off to this Summer?
Imogen: I’ve a couple festivals still to come, V in the Park which is a new vegan festival, and then Latitude Festival in July. After that it’s all go with the Words w/ Friends tour, we’ve got 10 dates all around the UK. Finally it’ll be Fringe time where I’ll be performing #Hypocrisy alongside doing some other guest spots throughout the month.

Can you tell us more about your Fringe show?
Imogen: The show is called #Hypocrisy and is a fusion of spoken word, theatre and original music. It’s my Fringe debut and will be on at the Scottish Poetry Library from August 8-12th at 7pm. The show is a response to the bizarre world we’re living in. One where dangerous politicians prevail, where the media constantly sells us fictions masquerading as realities, where an ocean of social media sympathy can pour forth for western terror victims but backs turn on the migrant crisis. Ultimately, a world of staggering hypocrisies. It’s presented from my perspective as a young white woman. Beginning by looking into my experiences travelling as a musician through Europe (during which time I often found myself reaping the benefits of my skin colour) it opens up to explore what is evidently becoming an increasingly racist world. The show is a contemplation and an interrogation of western privilege. It’s an exposure of hypocrisy and a reminder of perspective.

What will Imogen Stirling be doing after the Fringe?
Imogen: Hopefully a brief stint in the Canary Islands to unwind a little after what’s been a very full on year. I’m planning a tour for #Hypocrisy, an album, and a new top secret music project. There’s a lot to look forward to, I’m very excited. 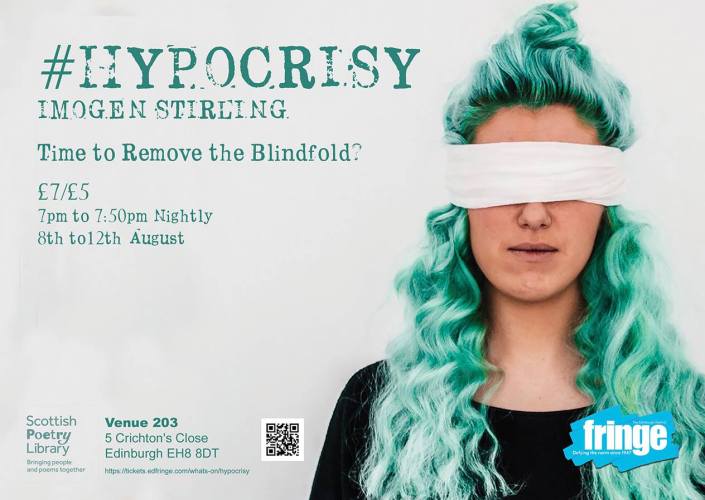