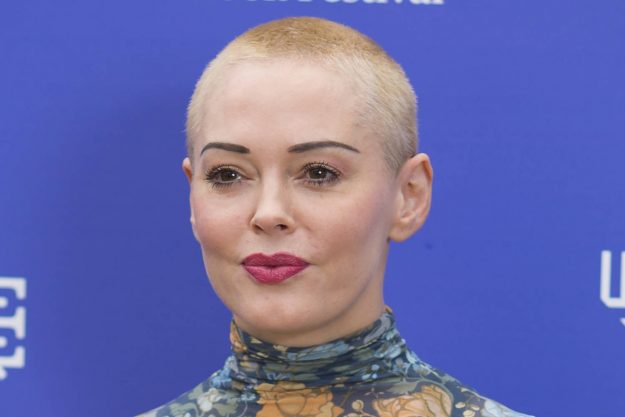 If any of you are for some bizarre reason unaware of who Rose McGowan is at this stage then its time to be introduced. McGowan was until recently mainly known as an actor, appearing in independent movies but also toying with the majors in films such as “Scream” and the successful TV show “Charmed”. All that changed though last year though when she became a Hollywood whistle-blower with regards to the sexual abuse prevalent in the film industry. Her courage in doing this helped to bring down Harvey Weinstein, one of Hollywood’s biggest players as well as encouraging other women to come forward with their own experiences kick-starting the ‘#MeToo movement’. But you knew all that already – unless that is you’ve been hiding under a rock for the last year. What you might not be aware of is that McGowan is now also an author and was here at the book festival to promote her autobiography, “Brave”. It was clear from the start of the interview that Afua Hirsch herself is something of a fan so I was concerned this was going to be a rather fawning affair – the acolyte stroking the ego of the glamorous movie star. Yet from the very beginning it was apparent that McGowan was not that kind of actor. Giving us a reading from the introduction to her book it became clear that her journey from Hollywood starlet to social justice warrior was complex and owed much to the harsh lessons of her early life.

McGowan described how her upbringing in a religious cult, “The Children of God” led her to have direct early experiences in the abuse of power which she feels is also so prevalent in Hollywood. She described how she feels the use of trigger words, punishments and similar cult techniques are used not only in Hollywood but also in the politics of Trump. In fact it was Trump’s election that encouraged her to contact the press to break her story early ( she was already writing the book). Sick of seeing the rise of sexism and racism his presidency seemed to foster she felt it was the right time to speak out. McGowan mentioned almost casually that when she was attacked by Weinstein she told people right away but was ignored or dismissed. Feeling voiceless she essentially just ploughed on with her work trying to distance herself from the culture of Hollywood whilst remaining working within it, an experience she described as being “a lonely road”.

Whilst working on her book and when she started to talk openly about her experiences she began to be hacked, stalked and spied on, an experience which has in part led her to selling her Hollywood home and living out of a suitcase. As she describes it “Hollywood acts like the mafia to protect its own’. This did not silence her however but merely encouraged her in the belief that she was doing the right thing. This steely resolve is clearly at the core of her as is a sharp self-aware intelligence which is critical of her own previous inability to see the warning signs of threat and danger in her early days in the industry. A former teenage runaway with ‘street smarts’ she could only put it down to being overwhelmed by the oily charm of ‘people who were not my people’. McGowan acknowledged that the last year has been tough on her and that “the stress of it almost snapped me’ but that it was fantastic that so many people were now coming forward to tell their own stories. When questioned if she had any inkling as to how big this would become she said that she didn’t think about it at all, that she just needed to act in order to as she put it “make it impossible to look away”.

The roots of the abuse she feels run very deep indeed and she described the serial abuse of aspiring starlets in the 1920’s as being not the casting couch but “the rape couch”. She described how she has been forced to look back over some of her early sexual experiences within Tinseltown in a new light as the molestations that they really were. Far from being merely an issue within the industry she feels that if women look back over their own lives they too will recognise this.

McGowan expressed her feeling that Hollywood holds a ‘fucked up mirror’ for all of us to gaze within and shows us a distorted image of the world which is damaging to both men and women alike. She feels that it is important for all of us to be self aware and critical of the culture we live within and be conscious that “what you have consumed from birth has formed you”. She feels that the images of women in much Hollywood product have a toxic effect on self identity and self esteem saying that “the men who thought they owned me think they own you too” This could all risk sounding a little hypocritical coming from an actor involved in the movie making machine itself but in fairness to McGowan she has remained mainly in independent cinema and been canny about her choices ( ‘Charmed’ being the longest running female led show in network history). She also is quick to point out how difficult this is admitting to loving ‘classic movies’ herself.

McGowan sees herself as essentially an optimistic person, and believes that Trump is in a sense an enabler of the kind of radicalism she espouses. She has no fear of offending and admits that to an extent it has cost her a more conventional creative career but believes that “being well behaved was not working in our favour”. By the end of the talk I was a fully paid up member of the Rose Army and would have happily taken the Queen’s shilling to do battle on her behalf. She was an eloquent, passionate and bracingly honest speaker who’s courage in speaking out against one of the most rich and powerful industries in the world has given us all encouragement to challenge corruption where we find it. Long may she reign.