Carol Ann Duffy doesn’t smile much, one never knows how to take her. So when it was announced at the beginning of the event that there would be no question-and-answer session at the end, and that the poets who were taking to the stage had asked us not to tweet during the performance, there was that kind of hush you get when everyone wonders whether this was going to be a po-faced afternoon. As it turned out, there was no need to worry at all, because it was a sheer delight from beginning to end, so much so that the hour went by in what seemed to be the proverbial twinkling of an eye.

Carol Ann has an ongoing policy of seeking out relatively unknown, emerging poets and championing them. The presentation today included two of her latest protégés, Mark Pajak and Keith Hutson. Neither of them had ever appeared in a Book Festival event before – Mark said he had been here as a punter – and when I asked them afterwards how it felt now it was all over, they both testified to the adrenalin still working. You wouldn’t have known that they were anything other than totally relaxed from how they came across in front of the audience; this isn’t really all that surprising, as they had both given readings before, that much is obvious.

Mark Pajak is a Liverpudlian. He has a careful, lilting delivery which – he won’t thank me for this – reminds me a lot of Roger McGough. I know, such comparisons are inevitable whenever a poet from Liverpool appears. In Mark’s case there is something about the timbre of his voice and in the questioning inflection at the end of lines that evokes this. It is a style of delivery that captures and holds the attention, however, and it makes an audience hang on his every word. There is a lot of humour in his work, and a lot of tenderness. His account, a love poem if you will, of a stupid prank that he and the best friend of his childhood and youth carried out, and how it led on to the rest of their lives was… all right, I’ll say it… one of the most wonderful expressions of friendship since Edward Elgar wrote ‘Nimrod’. Over the top – moi? I’m being honest here, it was a Scouse David-and-Jonathan thing. 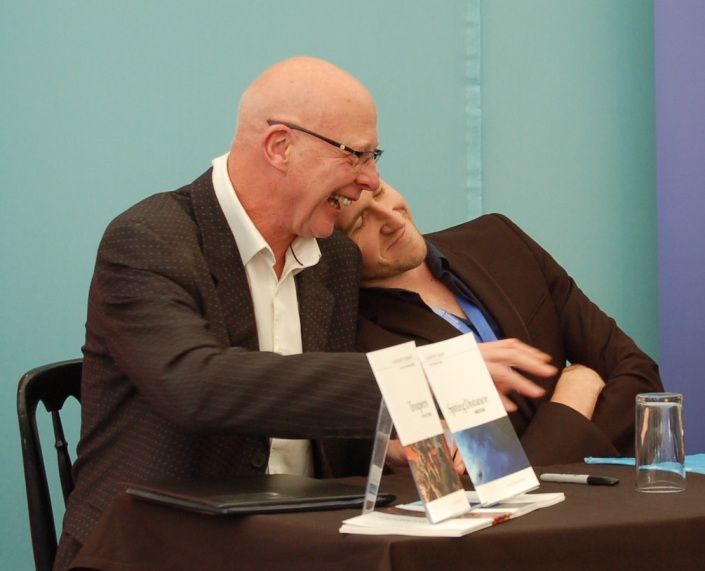 Keith Hutson was either born in Lancashire and lives in Yorkshire, or vice-versa. Anyhow, the Roses cricket matches must be hell for him! In contrast to Mark, Keith delivers his poetry and the intervening patter with a broad if imperfect grin. One tooth is missing. “You should see the other poet. All I said was don’t give up the day job!” His speciality is the celebration of bygone stars and meteors of the music hall and variety. His subjects ranged from an impresario who, after a walk-out by his whole cast, performed solo on stage every character in the story of Dick Turpin, to bandleader Ivy Benson and the resentment directed her as an outstanding female in a male world, to railway-obsessed, RADA-trained (hah!) Reginald Gardiner. I think Keith was tickled when, afterwards, I said “Reginald Gardiner – that’s the ‘biddly-dee, biddly-dah’ man, right?” Readers, that’ll only mean something to my generation, people who remember ‘Uncle Mac’ on the radio on Saturday mornings!

Carol Ann bracketed the event. She flagged up the humour of the event by opening with her short poem about encountering a gorilla at Berlin Zoo; they stare each other out, the gorilla’s gaze barely concealing rage – “with a day’s more evolution, it could even be President.” Okay, well-judged there, she took a chance that a certain politician currently prominent on the world stage is not popular in his ancestral country and it paid off. Her finishing poem was a sestina. Carol Ann can do this, she can bend old poetic forms to her will. This sestina depended on the repetition of six words (of course): arseholes, gatekeepers, chancers, tossers, bullshitters, and patriots. In passing, I wonder if, when she first wrote that poem, she speculated beforehand which of those six words spellcheck was going to reject, and whether she experimented just to see whether her computer would accept the American spelling of ‘arsehole’. Anyway, that’s hardly relevant, because her sestina wove those words and several homophones round themselves like the patterning on a Fair Isle jumper. I confess that I have never been her greatest fan, but reviewing a reading by her and, as is necessary in a good review, leaving my prejudices outside, I can say that I now see precisely why she was awarded the Laureate. Applause.

Overall, this was a splendid event to start of my personal tour of duty at Charlotte Square – thank you, Book Festival – but as always it felt much too short. I know, that can’t be helped.