Not only does Max Scratchmann possess the most deliciously suave of names, but he also loves to present the poetry-lovers of Edinburgh something different, something theatrical, something cool. His Halloween special, therefore, drew in poets from across Scotland to interject & connect with the continuous tartan thread that is Jennifer Ewan & her band. 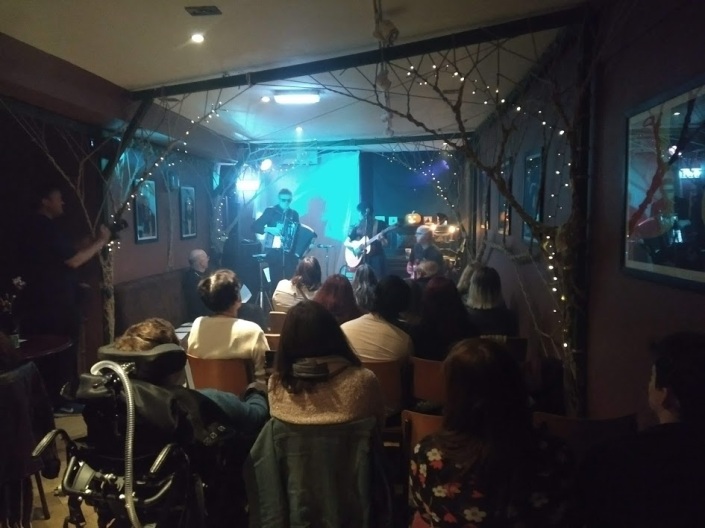 The prominent theme, of course, was the frighteners, but I found the evening less fearing & more full of fun, for the performers were all of the highest level. So, half of the time we were being regaled by the band – alongside Jennifer on guitar & vocals were Kim Tebble on accordion & Simon Fildes on bass; all were clad in black & their music swarmed into the ears of the healthy & ever-appreciative, sometimes-even-dancing audience, like bison reaching a prairie water-hole. We were given a steady stream of well-chosen numbers; of Jennifer’s own creations & also covers, when numbers such as Bessie Smith’s ‘Take me to the Electric Chair‘ sounded amazing with a Scottish burr.

As for the poets, there were five of them, who did cheeky wee floor spots in between the ballads on both sides of the interval. Our host Max’s first poem defined Edinburgh as a ‘city of murder ballads‘ & we were off.  A lot of the material was freshly written for the night – Molly McLachlan admitted to composing hers in Leith Weatherspoons earlier that day; not that you could tell – it flowed with elegant mastery. She, & the other poets – the shamanic Stella Birrell, the regal & dramatic Nicoletta Wylde, our beloved Max of course, & the rapid-tongued Scott TheRedman Redmond – presented some of the highest standard & absolute quintessence of performance poetry a la 2018 – when the post-modern polemical story-chaunt is all.

With half of the audience & all the performers making an effort aesthetically, & webbing & branches hanging off the walls of the venue, a genuine Tam O Shanter like vibe was  gothically invoked. Thus setting & content were perfectly matched, upon which occasions good times are guaranteed, a tradition which Murder Ballads perpetuated with ease. A fluid, fascinating, & above all entertaining night’s entertainment.

This entry was posted in Poets, Scotland.