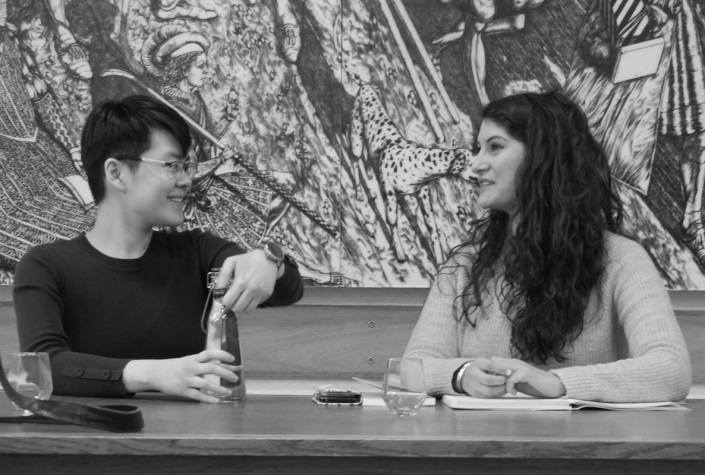 I am ashamed to say that it totally passed me by that Friday was International Women’s Day until I was on the train home. There, I’ve got that confession out of the way, so there is no danger of my falling for the temptation of claiming I came to see these two poets as some kind of celebration or act of solidarity. Nope, I just had poetry on my mind. I had just come from a free lunch at the ‘Poetry Café’, and hearing Nadine Aisha Jassat start off by remarking that she had her “Fisher and Donaldson stash” offstage right made me hope that this wasn’t going to be the “pudding session” of the day. Don’t worry – it wasn’t. 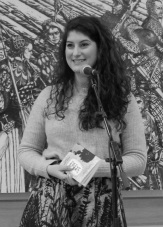 However, wherever I go at StAnza synchronicity seems to keep step with me, and today was no exception. Nadine’s first poem was about her grandmother, who has Alzheimer’s, and whom she refers to as a “time traveller” because of the shifts in time and place that seem to go on in her mind, according to the narrative of her one-sided conversation. Of course I too am a time traveller as I write this review, having just written a review of an event from Saturday the 9th, in which the topic of dementia also came to the fore. Review-writing can be approached phenomenologically, let me tell you… oh… Let Me Tell Youis the title of Nadine’s debut collection, damn this synchronicity thing! As for her grandmother, Nadine says that her time travelling is by turns moving and hilarious, because you can never be quite sure what you are going to get.

I can see the “moving” part of it without any problem; to watch an elder’s memory loosen like a piece of fine, paterned cloth having threads tugged from it must be especially poignant for someone with as many threads to her heritage as Nadine has. Her voice is Yorkshire, her family story is full of other people’s journeys to where she is. Her own journey includes, expressed in a poem – “Hopscotch” – all the words that men have said to her on the street. There is only one up-side of the latter circumstance, and that is the poem itself, its anger presented so gently in a simple reading, used as a reason to create. If you want to hear it in full menace mode, then I suggest the following short film by Roxana Vilk, which is based on the poem.

Mary Jean Chan is a poet and an academic living in London, though originally from Hong Kong. I love the way she delivers her poetry, which is with composure and utter clarity. It’s not surprising to note that when she was a young adult she was a fencer, nor is it surprising to find out, in the context of border crossings, that her discipline was European – she handled an épée – rather than Chinese. Given the subtlety and directness of her poetry, the simplicity of the choice between a straight and pistol grip seems entirely in keeping…

Here I stop and stand apart for a moment. There is a challenge to ‘Border Crossings’, and it is this: how much attention do we give to the ethnicity, or the actual mix of heritages, that the poets bring with them? There are those of us, I suppose, who try to keep this uppermost in their minds, and others whose priority is to try to let the words, the actual poetry, take them. What, on that sliding scale, is appropriate? Each poet – every poet fulfilling a ‘Border Crossing’ role at StAnza – has crossed, or even ‘transgressed’, some of the fault lines that we, humanity, have opened up for ourselves. They have made a conscious journey, taken a step across a metaphorical meridian, made a choice to say this-and-that in such-and-such a way not necessarily their own, or perhaps have brought something very much their own and set it down in the context of a Scottish poetry festival. Take Mary Jean Chan, for example, whose latest collection is called ‘Flèche’. She has already crossed from Cantonese to English; now that French word, a homophone for ‘flesh’, crosses yet another border, punning as it goes. The blurb for her book puts it like this: “This cross-linguistic pun presents the queer, non-white body as both vulnerable and weaponised, and evokes the difficulties of reconciling one’s need for safety alongside the desire to shed one’s protective armour in order to fully embrace the world.” In French, ‘flèche’ means ‘arrow’, and it is also a method of attack in the discipline of épée.

Over her vulnerable flesh, “my skin is yellow,” she says in one poem, and in doing so she takes on directly one of our fault lines – the biological fiction of race and skin colour, of which we have made so big a deal, so great a burden for ourselves. And then in the next she cites fencing: “As a teenager […] the closest thing I knew to desire.” It is a sudden and surprising launch of an image, direct, as I said before, to find a fighting sport, a combat between two people, made cognate with sex and with sexuality, the homosociality of the young women’s group suddenly given a tension that wasn’t there before as they change between one uniform and another.

This is brilliant stuff, and no mistake. At the end I wanted to shake both poets’ hands, I wanted to cross that border between listener and… something else. In the end I only managed a brief passing comment about Yorkshire to Nadine, but I did shake Mary Jean’s. I took hold of a hand that had both held an épée and penned poetry, and I left the Town Hall buzzing, and ready for a cup of normal tea… that sounds like normality… and which, in my case, means Earl Grey.