Studying the Zeitgeist through the Words of our Authors

Authors are like the yardstick of an age. It cannot be denied that we live in fairly tumultuous times – no one is being bombed or anything, but the unregulated powers of the internet in an increasingly media-driven populist world is not helping the well-being, both physical & mental, of the planet. In response, I picked out three talks at the Edinburgh International Book Fest to see what our intelligentsia had to make of this ‘insanely atomized individualised world {David Greenblatt}.’ 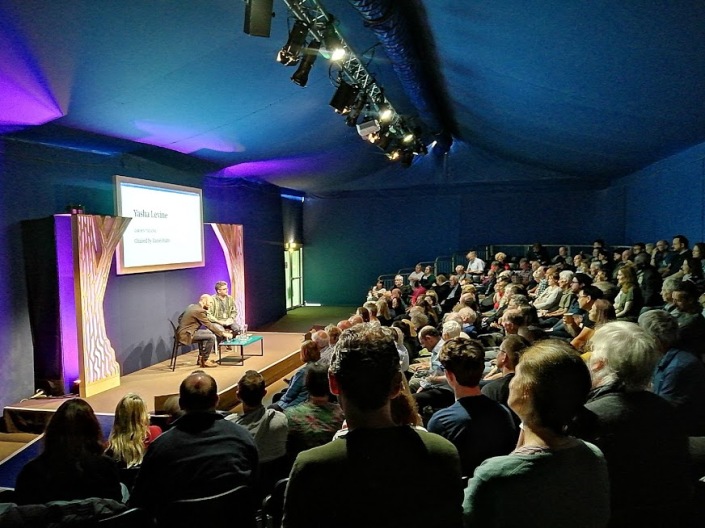 Yasha Levine was first on my radar, a Russian emigre to America, who recited the snippet-history of the internet, of how most technological inventions originate in the American Military & are sold off into private hands. His theme was how, just as the Soviet eutopia failed, so the internet dream of peaceful & co-operative global harmony has been usurped by oligarchs & weaponized in our times. The internet is a powerful force which shapes society, & just as the American military devised the internet to manage its growing global empire, its pretty much doing the same thing today through its proxy, big business, which is in essence both an aspect & an instrument of the state. Levine explain’d perfectly how we are becoming A-social beings, fed a constant stream of subliminal messages that are non-compatable with a democracy; allowing oursleves to be controlled, our thoughts corrupted by advertisers who study populations & buy our eyeball time in a constant quest to make us consume stuff we don’t really need.

My next talk was based on a book called Others, brought into existence by Charles Fernyhough & containing the writings of a great number of like-minded authors, all opposed to the hate-insipring agenda of the aforementioned media-driven populism. Their remit was to, ‘explore the power of words to help us to see the world as others see it, and to reveal some of the strangeness of our own selves. Through stories, poems, memoirs and essays, we look at otherness in a variety of its forms, from the dividing lines of politics and the anonymising forces of city life, through the disputed identities of disability, gender and neurodiversity, to the catastrophic imbalances of power that stands in the way of social equality.’

Accompanying Fernyhough were Colin Grant, Marina Warner & Will Storr, who gave a session which, although preaching the Otherness of the world, felt more like a chit-chat straight from the Green Room. It didn’t help when Colin Grant began celebrating having his Caribbean accent pomelled out of him by public school & his ‘ascension’ to the Middle-Classes. Of the information acquired from the four-way talk, the most meaningful came from Marina Warner, a veritable Dame of the British Empire, & President of the Royal Society of Literature. She highlighted how refugees have no language in common with their ‘saviours’ – the Nigerians who speak English are a rarity, really – which, she explains, holds back the human spirit’s natural capacity to dismiss all previous misconceptions at point of contact. There are a distinct lack of entry points, she tells us, & suggests song-sharing as a solution, from which should spring a fusion of memories & shared experiences. Instead, the sentiment I gained from this, and my Western-Eastern Divan talk the other day, was that we must finally create the Universal Language to open up the Universal Soul. Once the Fringe is finished, I think I might just get to work on it.

The third of my trio of talks was David Greenblatt, an incredibly passionate, intelligent & eloquent speaker, if a little over-florid in his prose. His new book is all about how football has taken up, in the last twenty years, a place of global hegemony, becominc a tool of socio-political control in pretty much the same way as the internet. According to Greenblatt, this last bastion of human drama is being used for money, power & influence, with modern football revealing some of the more unappealing attributes of capitalism, such as South America being hollowed out by the richer European leagues. He tells us how oligarchs are now in control of football, just as they run the internet. As I listened intently, I realised how football is simply a mirror to the world we live in today – where austerity measures are forcing councils to sell off grass-root playing fields, while Alexis Sanchez is on half-a-million a week for being a bit of a damp squib at Man United.

Greenblatt’s talk was full of fun facts – 100 million Indonesians watch their rather mediocre national team on TV; European football makes more money than its publishing, it was illegal to play football as a woman in Brazil up to the year 1979, & so on. His endearing message was that we should build a world where the outcomes of life AND football matches should be determined by strength, talent & belief; not money, power & influence.