An Interview with David Lee Morgan 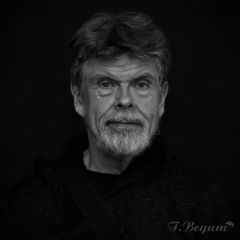 Hello David, so where ya from & where ya at, geographically speaking?
Born in Berlin, grew up in Carbon County Utah, Pasco Washington and Seattle. I came over here in 1983 to join in the demonstrations against the installation of Pershing and Cruise missiles in Europe. The rest of the group came with return tickets. I came with a sleeping bag, a guitar and a saxophone and a one way ticket. I’ve stayed here as a street musician ever since. I started out living in the Kukuuk, a squat in Berlin, travelled all over Europe and ended up based in London for the last 30 years.

When did you realise you were, well, talented?
i still have bouts of doubting if i am talented. Our dad was an actor and i’ve always considered performing as a natural thing that everybody can do. I loved drawing and painting and did tons of it from the time i was a toddler. When i was 14, i went off to the seminary to study to be a Catholic priest. I wasn’t allowed to paint there, so all that creative energy got talented into writing poetry and stories.

You are something of a modern day troubadour. What is it about travelling & performing that makes you tick?
My ambitions have always been as a writer, not a performer. I enjoy performing, but i do it mainly because it’s the only way i’ve been able to get the stuff i’ve written out to an audience. I would love it if other people did my shit.

How do you know you have just written a good poem?
I’m never really sure until awhile after i’ve written it – in the heat of creation, everything seems wonderful. Then the cracks begin to appear. Sometimes i don’t realise how good (or bad) it is until i’ve performed it a number of times.

What does David Lee Morgan like to do when he’s not being creative?
Eat ice cream and watch crap videos.  I should also mention a life-long obsession with philosophy, from the ancient Greeks, to Marx, Lenin, Mao to contemporaries like Alain Badiou and Bob Avakian.

Last year you brought Media Dream to the Fringe, what was it like orchestrating a piece rather than performing?
Performing a poem in front of an audience (when it works) is like having really good sex.
Seeing a play you’ve written come to life on the stage is like falling in love.

Medea Dream is just one of your many plays & novels, etc. Where do you get the energy from to be so prolific?
My productivity comes and goes. I’ve spent years working 8-10 hours a day, 6 or 7 days a week. But i’ve also gone for months, just travelling around the world, singing and playing saxophone – or watching tv and eating ice cream. I guess energy comes from motivation. I’ve always wanted to create, to draw, paint, write… and do philosophy.

Can you tell us about this year’s contribution to the Edinburgh Fringe?
THE OTHER SIDE OF THE FLOOD is a solo spoken word musical for six voices. This is the description in the program:
“A computer wakes up in the year 2035, on the eve of the world socialist revolution… Fighting has broken out all over the globe. For the first time, the US military has used tactical nuclear weapons on its own population. Suddenly, all communication stops. A new player arrives on the scene – a singularity, a computer exploding up into consciousness and fighting for sanity through a barrage of conflicting images and downloaded personalities.” THE OTHER SIDE OF THE FLOOD is the third in a trilogy of shows that will be published by Stairwell Books in the Autumn. The first, SCIENCE, LOVE AND REVOLUTION, was about… Science, Love and Revolution, and was developed through many performances, mostly in the London spoken word scene, which is so diverse and international. The second BUILDING GOD, was a history and defence of three revolutions: the Paris Commune, The Russian Revolution and the Chinese Cultural Revolution. I wrote it with the attitude – this is what i think, if you don’t like it, fuck off. But to my surprise, many people coming from many different places politically really liked it. They responded to the poetry and to the complexity of the thinking. I didn’t win them to my point of view – that wasn’t the purpose – but they said the show inspired them to think that there was a lot of history that they needed to investigate in order to get beyond the propaganda and lies. However, they went on to say, “but it could never happen again.”

So that became my challenge for this third play: not to write a blueprint or a detailed prediction of the future, but to use imagination to enable people to see that revolution was possible. As I wrote, it became clear that if the play worked, it would be about feeling, rather than just thinking that it was possible. I had a second goal as well. It’s clear that if a real world revolution is possible in any way, it must include many hundreds of millions of people who are committed to their religion. My own experience as a revolutionary communist working in the anti-vietnam war movement, was that priests, nuns and just regular Catholics involved in the Liberation Theology Movement were totally committed and totally fearless – and coming off their missionary work, had a very good understanding of imperialism and its evils. I wanted to embody this in the play. I wanted to embody an alliance between revolutionary communists (atheist) and revolutionaries inspired by their religion to fight for true justice. Because i have fairly close ties (through music and poetry) with the Bengali community, I chose to centre the play around two people: Amparo, a revolutionary communists and a leader of the Los Angeles Commune, and Hamida, a leader of the Party of Islamic Socialism of Bangladesh.

What does the rest of 2017 hold in store for David Lee Morgan?
I have been doing Free Fringe shows at the Banshee for 5 years now (plus a few earlier, going back to 1997). They have been concept shows, where i have spent a year (or more) researching, thinking and writing on the theme. After this Fringe, I am going to take a break from concept shows, and just write individual poems on whatever personal or political things hit me. I have felt constrained this year – when so many momentous things have been happening – because i have had to focus on this show, THE OTHER SIDE OF THE FLOOD. I don’t regret it. It was what i had to write about. But now i want to get back into the real world.

You can catch David at this year’s Fringe