An Interview With Magi Gibson 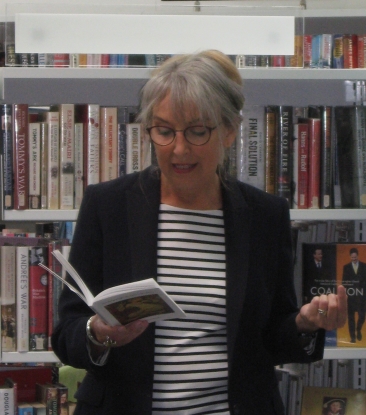 Hi Magi, where ya from & where ya at, geographically speaking?
I was born in a castle on a hillside, with high stone walls and a magnificent wood-panelled entrance. One day it metamorphosed into a university with white swans on a beautiful loch. It sounds like a fairy tale, but it was real life in Bridge of Allan, Scotland. OK, at the time the castle was being used as a maternity hospital, and I was only there for a few days before I was brought home to the small mining town of Kilsyth, 11 miles north of Glasgow. An ex-weaving town, with a strong socialist tradition, the pits were already closing down as I grew up. I walked past huge black bings to go to primary school. My childhood there growing up in a council house shaped me. I’ve lived a lot of my life in and around Stirling and Perthshire – with a year in Paris – and I now live in Glasgow.

When did you first realise you were a poet?
1985 I realised it was a possibility. I’d just started writing and I read the first poem I ever wrote at an event to celebrate the contribution of miners’ wives to the miners’ strike. It was in Stirling Miners’ Welfare Hall and there were about 200 people squeezed in. I was terrified. The poem, “My Father’s Dungarees” is essentially about shame, bullying and pride. They loved it and took the copy I’d read from and pinned it up behind the bar. The connection with the crowd was electrifying. Personal and political. I knew instantly I wanted to do that again.

Which poets inspired you at the beginning & who today?
When I was wee, we had a huge, old family book of the complete works of Robert Burns with copperplates and I was allowed to put it on the table and read it. I loved rolling the Scots words around in my mouth. At secondary school I loved the Romantics. But as a woman, reading the Polish poet Anna Swir was pivotal. The way she writes about the female experience, from the body, as if it’s universal, with such a quiet, pared-back quality, yet such depth. Other favourites are Sharon Olds, for her dark wit, Adrienne Rich for her subversive wisdom and daring structures. Norman MacCaig for his off-kilter way of squinting at the world. Anne Sexton for her courage. At the moment I’m going through a wee love affair with Imtiaz Dharker. I love the musicality of her lines. 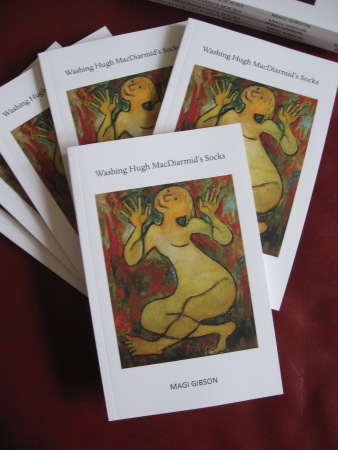 You are a widely loved & read poet along the length & breadth of Scotland, Magi Gibson. Your works have been published by all the main Scottish publishers. Can you tell us about the poetry scene in your native land?
It’s vibrant and varied and poetry thrives in Gaelic, English and several varieties of Scots. Like many poets I can be relatively reclusive, but the Internet lets me peek into corners, and I’ve travelled extensively. There are a lot of poetry communities in Scotland’s main cities, from rap to spoken word to page poets. Writing in every form imaginable. And lots is happening in more remote areas too. I’m always pleasantly surprised when I get an invite to Peebles or Skye. (Note. It’s been a while. How about asking me back?) And, of course, as well as community groups and on-line groups, universities now run creative writing courses. All very changed from when I was first writing and you were lucky if you could find a local writing group with members under the age of 90. We’ve lost some of the best paper magazines from years ago, like Cencrastus and West Coast Magazine. Chapman is all but gone, and it looks like Gutter will disappear, both of which will leave a big hole at the quality end of Scottish publications. But we’ve gained The Poets’ Republic, with its Gaelic section, and we still have Northwords Now, and Pushing Out the Boat which I was founding editor of in the north east in 2000. I’m sure there are others I don’t know about. I don’t keep a close watch. And there are on-line magazines like Glasgow Review of Books with its interest in poetry in translation. In years to come I imagine this will be seen as a very vibrant time for Scottish poetry. Partly because of the turbulent political times we’re living through. People have a lot to feel uneasy about. A lot that needs expressed, and poetry is a good means to do that. But partly because poetry has been given more prominence by posts such as that of Scottish Makar and the Makarships of cities like Glasgow, Edinburgh, and Stirling, where I was Makar for three years.

What drives you to create a poem?
An itch in the soul. Something snagging on my consciousness, that I can’t shake free. It might be something glimpsed that’s achingly beautiful. Or something that happens that disturbs me, something I can’t resolve in any other way than working it through in a poem. Anna Swir said, “The poet has a conscience with room to grow. What does not, as yet, shock and outrage others, shocks and outrages her.” A lot of my poetry bursts from that initial shock to my conscience. Like the poem, West End, Friday Night, when I almost ended up in a punch-up trying to save a young woman from being mugged. Other poems burst through from a love for humanity, like Mother and Child, about a young woman breast-feeding in an art gallery. Some are deeply personal, like My Mother’s Funeral, yet I know from poetry readings, that that poem touches many people deeply.

a lochan slate-grey bides her time, swollen-bellied
in February, her waters will break in March

a woman paints her nails, the air
thickens with the reek of varnish

between peaks that rise like stony breasts
a yellow lorry carrying eggs, races the train

and you, and Inverness

What does Magi Gibson like to do when she’s not being poetic?
I used to be very sporty, running 10Ks, and when I was younger playing basketball and doing lots of dance and exercise classes, but ill-health has put a stop to such excesses. Now I read a lot, with spates of bingeing on novels. My husband (Ian Macpherson) is a former stand-up and now writes books. We both work from our small west end flat, so our days are organised around each other. Chaotically. With much laughter involved. We’re a bit like two children happy in our imaginary world. Which includes an imaginary cleaning woman, Hilda, who forgets to Hoover or dust, but hits the gin hard. We go walks each thinking the other is leading, and we end up lost. We drink lots of pots of tea. (Loose-leaf Assam, for the aficionados.) We enjoy having to go to book festivals both here and in Ireland, and we go off to the Highlands for what we call writing retreats when we can.

Can you tell us about the Wild Women Writing Workshops you host?
I was asked to pitch an idea – something a bit different – to West Cork Literary Festival in 2011, and ‘Wild Women Writing’ based on my poetry collection, Wild Women of a Certain Age, seemed a perfect fit. The three day workshop not only sold out, it was over-subscribed, with women driving for over an hour on the first morning in the hope of a stand-by place. We extended it to five days to accommodate the demand. And that was it. The concept was fully born. I run the workshops over three or five days at a festival, or as an eight or ten week block. Sometimes I do a one-off ‘taster’. Each workshop is designed to unlock creativity and remove blocks that may have been holding the writer back. We may well cover the craft of writing, and how to get published, but that’s not the primary aim. The primary aim is to produce new and different work, for the writer to challenge and surprise herself.  The workshops are always sold out, and deliver very positive results. Sometimes women get in touch years later to update me. I hold them only intermittently though, as they drain a lot of my own creative energy. In order to lead them I need to respond to the dynamic of the group as well as the needs of the individuals as much as possible. Each of the women will have a different starting point and a different writing goal. It’s a creative journey I ask the women to come on with me, so it’s not a set pattern where I can say in advance exactly what we’ll cover. Though I can say that all source material will be from women artists and writers and there will be laughter and surprises along the way.

What are, for you, the differences between poetry written down & performance poetry?
I like my own poems to work, as far as possible, both on the page and in readings. I do perform well, and can hold my own on any stage, but I’m not a performance poet. The joy for me in going to poetry readings, which I did as much as possible when I started writing, is always to hear the poet’s voice. I remember early on hearing Norman MacCaig, Ian Crichton Smith, Edwin Morgan, Tom Leonard. When I read their poems on the page afterwards their voices sang back to me, adding an extra dimension. And later I read on platforms with them all. Performance poetry seems to me to be a more high voltage affair. More of a theatrical experience, a word-lovers’ comedy/cabaret cross-over, an emotional roller-coaster of an immersive crowd experience. But sitting quietly at home with a book, and a lamp, and the curtains closed, reading a poem, that is such a still, private pleasure, and suits me in my introvert state, the syllables and sounds dancing in the brain, the images spooling behind the eyes to the rhythm of my own quiet heartbeat. And after, letting the poem connect with my own life experience, the thoughts reverberate, sift and drift… And, of course, there is a whole skill to getting the poem to sit on the page so that the tension of the line works the way you want it to against the white space, so it reads back the way you want it to in the reader’s head. That’s a whole other challenge.

when I type in feminist
it autocorrects.

now my T-shirt reads
this is what a fantasist

What does the rest of 2017 hold in store for Magi Gibson, the poet?
I need to wait quietly and make space for poems to come creeping up on me.
There will be more readings from the new collection. There’s lots of parts of Scotland I’ve still to talk Hugh MacDiarmid’s Socks to! There will be many more cups of Assam tea. And the first Wild Women Writing Workshops in quite some time. I’ll be setting dates for them very soon. I’m headed to Aberdeen on Saturday 12th August, 7.30pm for a poetry reading hosted by The Poets’ Republic at The Blue Lamp where I’ll be reading with Northern Irish poet, Matthew Rice, one of the ‘best new British and Irish poets 2017’. And I’ll be reading and discussing poetry and writing and politics at two events on Tuesday, August 22nd at 1.45pm and 3.30pm at the Edinburgh Fringe at ScotlandsFest. Venue 40 • Quaker Meeting House 7 Victoria Terrace, Edinburgh.